Why I bought a Playstation 4 & Not an Xbox

The Xbox One and PlayStation 4 have been out for a year now and I’m ready to jump in. I’ve been the happy owner of a Wii U since spring (even happier this month with the release of the first Mario Kart 8 DLC for a terrific price), but since the last generation, I’m of the opinion that I need a Nintendo console and one of the other two to really keep up with console gaming.

What Nintendo does well no one else matches…but there’s a lot Nintendo doesn’t do well, so I couldn’t just be a Nintendo gamer in this day and age.

Which brings me to Holiday 2014. Microsoft is offering some jaw-dropping deals on excellent Xbox One packages from $329 (including 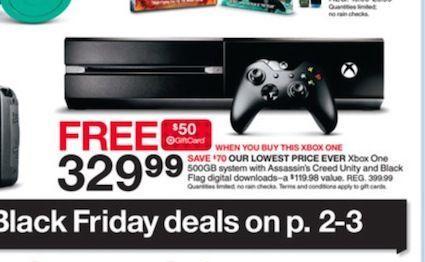 games). But while the price drop tempts me in that direction, I’m still going to buy a PS4 despite the lack of equally enticing deals. Here’s why.

To begin with, it’s probably going to be at least 2-3 years before I buy whichever system I don’t get this winter, so I want the system that’s going to give me maximum impact during that time. On a hardware basis, that’s the PS4. It’s CPU (main processor) is slightly (~10%) worse than the Xbox One’s, but this is more than made up for by its significantly better GPU (graphics processor), which is easily 30% more powerful than the Xbox’s. The PS4 also has faster RAM and offers 1080p resolution, meaning that over the next couple years as developers really settle in to each system’s capabilities, I suspect that the PS4’s added muscle is going to become increasingly rewarding. We already see this in experts’ comparison reports that the PS4 tends to run cross-platform games like Destiny orCall of Duty: Advanced Warfare a bit better than the Xbox One.

The hardware is irrelevant without the games, of course and for me, Sony has the slight edge here. Let’s start with exclusives. I do like me some Halo, and I’m intrigued by Titanfall, Sunset Overdrive, and especially Remedy’s upcoming Quantum Break—I’m a huge fan of Max Payne 1 and 2 and Alan Wake, which makes passing on QB for a few more years a real heartbreaker. But Sony has Naughty Dog, and I want whatever the creators of Uncharted and especially The Last of Us are selling (starting with Uncharted 4). I’m also interested in Quantic Dream (Indigo Prophecy, Heavy Rain, Beyond: Two Souls)’s next project, The Dark Sorcerer, because even their wackier titles are always rewarding. Infamous: Second Son (and First Light), The Order 1886, Little Big Planet 3 and The Witness (PS4 exclusive for at least a while) will be fun. Jonathan Blow’s The Witness (which may eventually make it to Xbox One, too) and Suda 51’s Let It Die will be strange, mind-bending auteur experiences, and Bloodborne, from From Software (Dark Souls) sounds great, too. And the open-world(s) gameplay of No Man’s Sky from Hello Games sounds staggering. The Grim Fandango rerelease is big for me, as it’s the only major LucasArts adventure release I missed the first time around (and my 2009 computer isn’t really built for gaming anymore).

I also feel the PS4 has the edge in indie titles. Sony really got ahead of Microsoft during the PS3/360 era in cultivating an indie ecosystem for their console, and so far that’s been true of the PS4, too, starting with Resogun as a launch title and continuing with PlayStation Plus’s pleasing range of free (with subscription) indie offerings. Microsoft might be able to make up some lost ground if, as promised, they do someday make the Xbox One dev kit free, meaning more indie developers could afford entry to the Xbox One market than to the PS4 market. I’m not convinced this will necessarily happen anytime soon, though, or that it wouldn’t be a mess initially until Microsoft figure out how to curate the slew of games of variable quality that would result. So for now my indie money is still on Sony.

Speaking of PlayStation Plus, while Microsoft have started to compete by adding some free games to Gaming with Gold, PlayStation Plus still offers more for your buck than Xbox Live Gold (and costs $10 less per year, though occasional deals make both cheaper). Sony also gives you 30 days of PS+ free as opposed to 14 days of Gold. Those 16 days are hardly a dealbreaker, but they’re representative of the tiny advantages that, more often than not, tilt in Sony’s favor, like better included headphones, a slightly more interesting controller (with the touchpad and speaker), no annoying power brick clogging up the back of my entertainment center, and a smaller, sleeker profile for the console itself on my media shelf. Microsoft has the edge in entertainment center versatility like hooking up your cable box and DLNA-capable devices through your console (an ironic advantage, since Sony started DLNA in 2003), but Sony says DLNA is coming to PS4, hopefully in 2015 and in the meantime, frankly it’s not something I’m sure I need right now. On the other hand, I’m intrigued by the PS4’s Share Play feature and also a fan of Sony’s rechargeable controllers over Microsoft’s AA batteries. Finally, Sony has the edge at the moment in adding virtual reality to console gaming, with Project Morpheus well underway, and no similarly clear plans from Microsoft in the offing—RoomAlive sounds fascinating but expensive and, in my apartment, dubiously practical, and if Microsoft’s working on a VR headset, they haven’t said much about it yet at all.

I certainly feel the Playstation 4 has more games to keep my interest right now, but I'm sure I'll pick up an Xbox One down the line when the new and used prices have dropped considerably. There are some Black Friday online deals that let me pick my own bundled games, so I’m probably going to throw Dragon Age: Inquisition and Call of Duty: Advanced Warfare into a package that will give me the most bang for my buck. But what do you think? Am I selling the Xbox One short in some ways? I’m certainly no Xbox hater, and it’s a tough decision for any gamer, which is good news for all of us because excellent competition works in our favor. What made you go for the Xbox One or the PS4 over the other, and are you happy with your decision? Anyone else buying this season—what’s your console of choice and why?