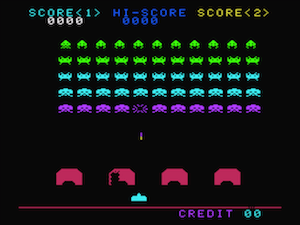 Shmup. Some gamers get a natural high just from saying the word while others can’t forget about the genre fast enough. Despite this, one thing’s for certain: shmup’s legacy will endure as long as there are video games to be played.

Why? Because this shooter genre is the one that started it all. Think back to the early days of arcade games and, more often than not, the titles you conjure up are shmup titles. There were no fighter jets blasting aliens before shmup, and they’ll never be done quite the same way again. But what really helped shmup to gain a foothold in the gaming world is that the

titles subtly evolved over the years, advancing little by little from arcade machines to consoles to next-gen consoles. So in the spirit of celebrating this throwback, here are five shoot'em up titles that defined the shmup genre.

There’s some debate as to whether or not “Space Invaders” is a true shmup. Compare to today’s shmups, maybe the criteria does fall short. But “Space Invaders” deserves the top spot on the list because it laid the groundwork for all titles to come by combining, for the first time, a static, look-down camera perspective and controls that allowed movement only on a horizontal axis. Upon its release, the game took arcades by storm, first in Japan, where it caused a 100-yen coin shortage because kids couldn’t stop feeding them into the machines. It captured the U.S. imagination because it featured a wrinkle Americans weren’t used to: the notion of the unbeatable game. Folks could play for days and weeks on end and still likely never crack double digits, level-wise. “Space Invaders” became the perfect open-ended pastime, and it’s the prime reason it, and shmup arcade games like it, are still found in bars, Laundromats and mini-marts today.

Capcom released this shoot'em up in 1984, and it quickly became a series, continuing with “1943: Battle of Midway,” “1944,” and “19xx.” But it’s the first title that’s the most iconic, as WWII dogfighting is what shmup fans think of when not thinking about doing battle with aliens. Whereas “Space Invaders” was static and featured a single axis of movement, “1942” was a vertically scrolling shooter, and you could move your twin-boom Super Ace all around the screen. “1942” laid the groundwork for future shmups by introducing weapons upgrades and helper aircraft. The good news was that “1942” was most certainly beatable, as all you had to do to win was make it through 32 levels and do battle with the formidable boss plane: Ayako.

We could get into the Ray-den/Rye-den debate regarding the correct pronunciation of this classic’s name (It is, in point of fact, pronounced “Rye-den”), but that would shift the focus away from what made this title great. Developer Seibu Kaihatsu created a deceptively simple game on its surface: it didn’t push any boundaries or break any molds, and it didn’t really add any new gameplay elements to the shmup genre. The controls were basic (dodge incoming fire, smash the fire button over and over, lob a bomb or two, etc.) Yet despite its traditional scrolling-shooter design it became a benchmark, one that continues to inspire game designers today. That’s because the enemies (giant weaponized bots powered by red gems) and weapons (toothpaste laser!) were imaginative, and the game never let you off the hook. Incoming fire was fast and relentless, and you could be sniped out of the sky at any time. It was a white-knuckle gaming experience for the ages. No wonder “Raiden” became a series, with each subsequent title eschewing style for simplicity and focusing on what worked before.

In many ways, “Blazing Lazers” was the TurboGrafx-16’s flagship shooter. It was even used in many of the advertisements selling the console. Turns out the machine’s manufacturers backed the right horse, because it ended up being one of the TG-16’s most popular titles, and today it enjoys a reputation as an enduring classic. The reasons for “Blazing Lazers” success were simple: up until then folks only knew flicker-heavy NES shooter titles; the TG-16’s hardware was tailor made for a great vertical scrolling shooter. Not only was the design solid, the game featured slick (for its time) graphics, creative level design and some tough bosses. And what about that soundtrack? It’s like Rush did a bunch of amphetamines and got it in their heads to compose a 16-bit magnum opus.

Another barroom arcade classic from Namco. This title was actually the sequel to Galaxian, which built off of “Space Invaders” by forgoing static aliens for those that moved down the screen towards the hero. But “Galaga” improved on its predecessor in almost every way, from graphics to soundtrack to gameplay to level design. The rapid rate of fire was certainly a selling point, because unlike “Space Invaders” you don’t have to wait until a single lethargic shot reaches the end of the screen before firing another. But like “Space Invaders,” “Galaga” is a skill came and just as nearly impossible to beat. Say you do make it through all 255 levels. Your reward? A great big fat kill screen.

These are just five games that have their place on the Mount Olympus of shmup. Indeed, the genre has been around so long that there are plenty of other classics worthy of an honorary mention. What do you think? Check out part 1 & part 2 in our series of some of the best retro gaming shmups of all time.

Tags:
Retro Gaming Shmup
Are Some Collectible Video Games worth their Price...
Until Dawn Review