There are a few video-game consoles out there, such as the Sega Saturn and the NEC TurboGrafx-16 that have been lost to the slow march of time. But avid retro gamers enjoy collecting these machines because they offer throw-back thrills and underrated gameplay.

Then there are the Phillips CD-i’s of the world. These were systems that fell by the wayside and out of the public consciousness for good. Check the forums of any 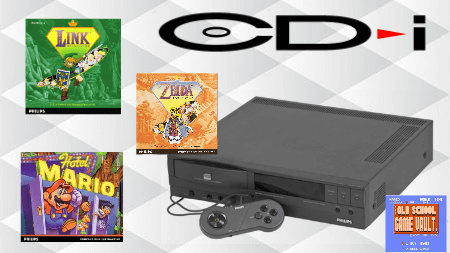 game site mentioning this system, and you’ll find far more comments along the lines of “I kind of remember this machine,” than “What an awesome console!”

But that isn’t to say the CD-i isn’t worth revisiting, if only in an overview.

It had grand ambitions

The Phillips CD-i wasn’t merely another system released to do battle in the ‘90s console wars. It was the result of the pairing of audio titans Sony and Phillips, who wanted to create a full multi-media system that played everything from interactive software discs to video CDs. That was the CD-i 210. But the system failed when it became evident folks weren’t ready to give up their VCRs just yet. Phillips pivoted and released a new machine, the 450, which was sold as video-game console.

It might have been the most schizophrenic console of its time

Upon its launch in 1991, the CD-i 450 retailed for a whopping $699. That’s a lot to ask a consumer to pay when they’re not even sure what the system does. The 450 sold itself as a gaming console yet looked like a CD player and alluded to personal-computing ambitions. It wasn’t even sold alongside other consoles of the time, instead being displayed next to consumer electronics and computers.

As far as hardware is concerned, the CD-i ran on a 16-bit CPU, delivered 1 MB of RAM, and had solid video-processing chips. The system supported audio, video, graphics and Kodak photo CDs. It was powerful for its time and it had the sleek look that Phillips was known for. However, to play movies and support the more advanced software, consumers had to purchase a separate digital video card. Add to that a cumbersome controller (as well as a controller port in the back of the console for some reason) and the system was cost-prohibitive as well as confusing.

Scrutinize most failed video-game consoles and you’ll find at least one common denominator—a poor game library. The CD-i was no exception, and their catalog of over 100 games is, overall, not impressive. Sure, there are those sunny-side-of-the-street fans who enjoy the CD-I’s unique takes on classic characters such as Mario and Link, but overall the library was bogged down with anemic games and useless self-help and educational titles. This stark reality contributed to the CD-i’s failure upon its release, as well as the general indifference with which gamers regard it today.

As for the million-dollar question, is the Phillips CD-i worth owning? It depends on the gamer. Those who enjoyed the gameplay and libraries of other consoles of the time, such as the NES and Genesis, should avoid this system like the plague. On the other hand, those avid collectors who want a nice-looking console to display on their shelves next to their Vectrex would probably enjoy it, since aesthetics are the CD-i’s biggest selling point.