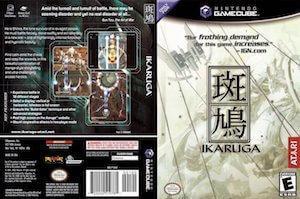 Do you fancy yourself a gunfight? And no, we’re not talking about the “Whoever draws first wins” kind of gunfight.

We’re talking about a gunfight with a million bullets, missiles, rockets and other projectiles flying around the screen as you, like the true badass you are, navigate impossibly tight gaps and unleash devastating, psychedelic blasts of hell upon your enemies. As you send them to the afterlife in a brilliant display of fire and brimstone, you chuckle quietly to yourself. This is just another Monday for you, pilot.

If the aforementioned scenario speaks to you in any way, welcome and strap yourself in. We’re going to talk about the best bullet-hell games or side scrolling retro video game shmups of all time.

Developers Cave are the grand daddies of bullet-hell shooters. And probably their crowning achievement in a whole library of stellar shooters is the Espgaluda series. The Espgaluda (pronounced esu-pa-galuda) series features a colorful cast of flying metahuman characters who can kick ass and take names. You are the ship, and boy oh boy, what a ship you are. The whole steampunk feel of the games and the incredibly creative bosses (as you’ll come to find are a staple of this genre) are

. All of your characters have a normal attack, a barrier ability and a super-cool slow-motion mode where time slows down and you can navigate the impossible swarm of bullets to keep pummeling your enemies. Not only that, once you’ve accumulated enough damage, your barrier unleashes a ridiculously powerful attack that usually fills the screen with the bodies of your foes. Good times guaranteed.

Yet another stellar danmaku (bullet-hell) title from Cave, the DoDonPachi series of games is a frantic ride that encourages multiple replays. Because once you’re familiar with the controls, you’ll be able to navigate the game pretty quickly. But that’s not what this is really about. These games are about reaching the end of each stage with the least damage taken and the most points accumulated. Once you’re trying to beat your high score, you’ll feel the pinch of each of the bullets your ship gets hit with. And when your entire screen is filled with bullets, that’s a lot of stuff to navigate. DoDonPachi Resurrection recently hit steam, and a lot of the older titles area available on mobile phones too.

Ikaruga only has five stages, but don’t let that stop you from playing one of the classics of this genre. Ikaruga is one of the more difficult bullet-hell shooters you can get your hands on, and the incredible combat system and memorable enemies are a sight to behold. Right off the bat, you’ll realize that there’s more going on than just shooting and dodging. Enemies appear in two colors, and you can switch the polarity of your ship to match the enemies you’re going up against. White enemies take more damage from black bullets and vice versa. In the same vein, white bullets from your enemies can’t hurt you if you have switched your polarity to white. There’s a tremendous amount of pattern recognition you’ll have to undertake if you are to complete this game successfully. You will die. A lot. But isn’t that part of the fun?

Sine Mora is one of the most beautiful shoot-em-ups ever made. Period. The futuristic, dieselpunk setting, incredible combat, brilliant set pieces, the fantastic cast of characters and a surprisingly engaging story make this an absolute must play. Sine Mora also operates on an interesting mechanic. There are no health bars or lives, only a ticking clock. Dealing damage adds time to the clock while taking damage takes time off. As long as there’s time on the clock, you’re in business. There’s also a cool, Prince of Persia-esque ability to reverse time that you can employ. However, this ability is extremely limited and you really have to fight tooth and nail to gain charges of it. Do yourself a favor and get this game.

The Raiden series of games don’t reinvent the wheel in any significant way. But they take the existing genre tropes and refine them into an experience that is truly one of the hallmarks of the bullet hell genre. This game is one of the most brutally difficult shooters you can play, and picking up any of the games in this franchise – Raiden Legacy, Raiden Fighters Jet etc. will quickly show you why it was such a coin-suck in the arcade days. Your craft feels powerful but never too powerful, and the game keeps upping the level of challenge until you’re almost ready to rip your hair out just as you achieve that perfect, exhilarating run.

In Part 2 of this series, we will be going over some more fantastic examples of screen-filling retro gaming, explosion-toting bullet-hell shooters. Until then, let us know what you thought of this list in the comments. Did your favorite games make the list? Which ones did we miss out? Let us know!

Tags:
Retro Gaming
Video Game Music is Now Everywhere. As It Should B...
5 Iconic Video Games that Defined the 80s

The Best Lost, but not Forgotten Video Game Consoles