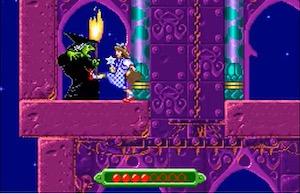 In the golden age of retro gaming, merchandisers thought of game consoles as marketing platforms rather than entertainment systems. Their devious plot was to create games that were basically commercials for some beloved franchise.

That included the adventures of various brand mascots, as well as today’s topic, video games based on movies.

The problem was these movie marketers didn’t know the first thing about making video games. And worse, they’d outsource to game companies who knew nothing about their franchise, either. Usually, the final product of such a venture was a barely playable game that only resembled the movie in the most random ways possible.

Today, we wish to share with you the best of the worst movie-based video games. Check out these hilarious ways that retro video games have rewritten our favorite movies.

Okay, the whole point of a movie-based game is to increase the sales of the movie, right? So why would anyone make an SNES game to advertise an over 50-year-old movie that everyone in the world has already seen?

Oh, we don’t know the answer. We were hoping you did.

Dorothy wishes for a magical place where no one’s trying to kill her dog and where the Great Depression isn’t happening. She tries to run away, but a tornado launches her to the magical, technicolored land of Oz.

There, she accidentally crushes a witch with her house, accidentally melts another witch with a bucket of water, and exposes the Wizard as a fraud. Now that Dorothy has learned to value home, sweet home, Glinda the Good Witch sends her back.

Hooray, Dorothy’s wishes have been granted! Or, it’s all a concussion-induced hallucination. We’re still trying to figure this out.

Dorothy and Toto are totally safe, lazily napping in the grass. And yet, she still wants to run away for some reason.

She doesn’t, though. Instead, she literally sleeps through a violent tornado strike that lands her on the yellow brick road in Oz. 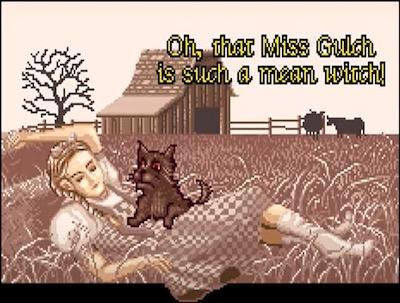 Next, she’s approached by the floating head and upper torso of Glinda the Good Witch, who poofs the Ruby slippers onto Dorothy’s feet. She commands Dorothy to deliver the slippers to Oz and to never take them off. Half-Glinda also gives Dorothy her wand so that the Y button has something to do.

Suddenly, the floating head of the Wicked Witch bunts Half-Glinda aside, exclaiming that she wants her slippers back. But, instead of taking the slippers, she steals Toto and leaves. Understandably, Dorothy is stunned beyond belief and says nothing. 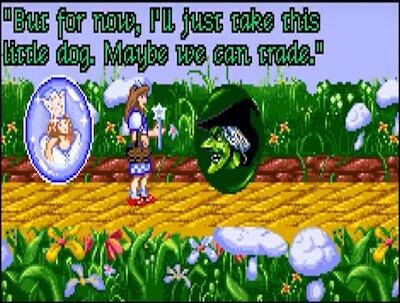 “Uh, sure, I’ll trade. I don’t need magic slippers. So, I’ll just take my dog back and—you’re gone. You left the slippers and took the dog. Great.”

In level 2, she wanders through the desert, kicking mean clouds and disintegrating rabid cats. Later, she kicks floating clocks, swims through lava, and terrorizes several villages inhabited by Baby Groots. For about half of this, the yellow brick road is nowhere in sight. 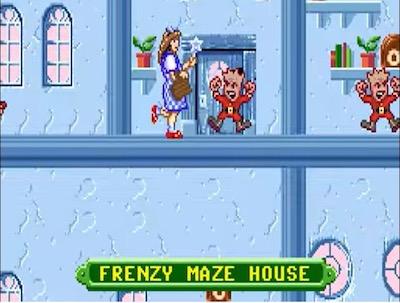 Dorothy vs The World

Throughout the game, Dorothy beats up giant monsters to free her iconic Oz buddies. Bizarrely, the Cowardly Lion is held captive by a rat in the sewer.

The best part, though, is the demise of the witch. Here, there’s no water bucket and no accident. Dorothy straight-up kicks her in the crotch until there’s nothing left of her.

“I just want my slippers! Seriously, what is wrong with you?”

Still Not The End

Unfortunately, the story continues for at least another half an hour. Finally, Dorothy gets the ruby slippers to the Wizard. But then, he whines that she used up all the slippers’ magic, and now they’re just worthless shoes nobody wants.

And yet, he still thanks her and sends her back to Kansas. That’s right, he sends Dorothy back. Apparently, the Wizard of SNES Oz is the real deal. 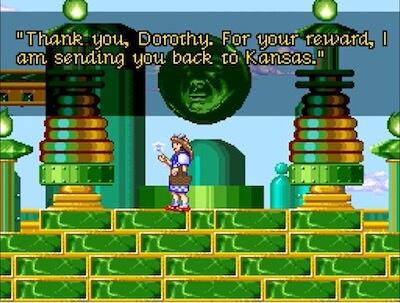 “Oh, the man behind the curtain? He’s just here to fix the furnace. I told you to pay no attention to him.”

As you know, there are loads of excellent Star Wars games on almost every console. And, gameplay-wise, this super-fun SNES game is no exception. Still, it’s completely bonkers, especially to those who have seen the film (AKA, all of us).

A long time ago, in—well, you know. Luke wants to help his buddies fight the war against space Hitler, but his uncle says he can’t. But then his uncle dies so now he can.

And he’d better get a move on because the Empire’s building the Death Star, a planet-destroying super weapon. With help from a wisecracking pilot and the ghost of a British space wizard (and a laser sword and the Force), Luke blows up the Death Star.

Oh, there’s also a growling big foot and a princess. The end.

In this version, Luke’s not too busy to fight the Empire because he’s bogged down with chores. Instead, he’s running around, torturing and exploding animals for no reason. He also keeps jumping into monster-filled sandpits instead of going around them. 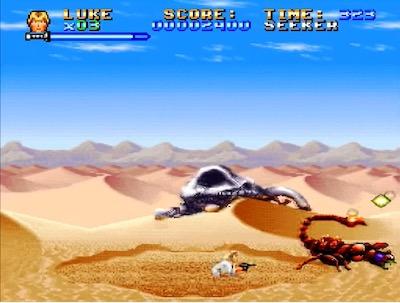 Next, he finds a stranded C-3PO who sends him on a quest to save R2-D2 from Jawas. (Jawas are the hooded dwarf creatures who sold Luke the droids in the movie.)

Luke then proceeds to murder the crap out of a million Jawas and decimate their place of business. Hilariously, they scream, “TEE-HEE!” as Luke’s laser blasts send their bodies flying. 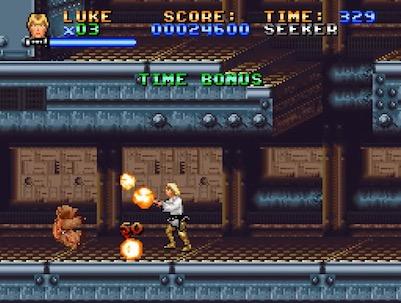 Next, R2 plays Leia’s message, prompting Luke to search for Obi-Wan. Naturally, Luke does this by reducing animals to puddles of snot and blasting the humanoid natives to smithereens.

Finally, Luke receives his fated lightsaber. 3 seconds later, he realizes that it’s nowhere near as effective as his other weapons, so he puts it away and never uses it again. 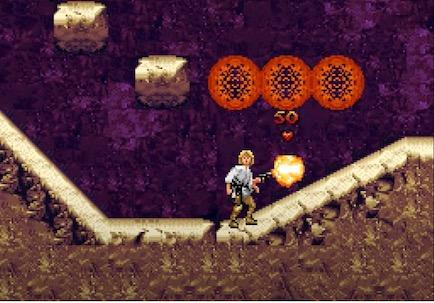 “You want me to use a sword? Against an army of armored gunfighters? Are you insane?”

Luke then arrives at Mos Eisley where, in the movie, Obi-Wan uses stealth and Jedi Mind Tricks to avoid causing a scene. And by “a scene,” we mean “excess violence that will get everyone killed.”

In this version, getting everyone killed is Luke’s answer to everything. So, he busts into town, guns blazing, and blows up anything that moves.

We think you can see where things go from here. The game repeatedly takes obscure Star Wars creatures out of context and has Luke execute them with extreme prejudice. Here, we see Luke battling that Claymation monster from Chewbacca’s chessboard. 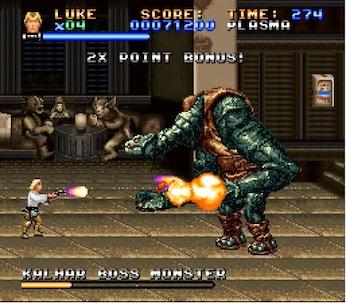 Try These Ridiculous Video Games Based on Movies

We hope you enjoyed our account of these ridiculous video games based on movies. But to truly revel in this madness, try these games for yourself.

You can browse our selection of Super Nintendo Games for Sale. Or, check out more movie-based video games that made insane changes to the plot. 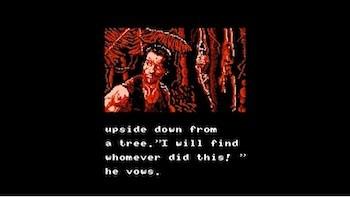