The Metal Gear Solid series is known for its fantastic, cinematic cutscenes and thrilling, tension-filled gameplay. Metal Gear Solid V: Ground Zeroes showcases both of these aspects of the series in their full glory.

Even though the main campaign will only take you about a couple of hours to finish, the game has loads of content to keep you interested. The open world format allows a lot of sandbox style gameplay, allowing you to choose multiple ways to achieve your objective. There are a lot of treasures hidden in this world, and finding them all will keep you busy long after you’ve watched the credits.

The main story of Ground Zeroes serves as a prequel to The Phantom Pain and fleshes out some of the storyline between Metal Gear Solid V: Peace Walker and its successor. The story is illustrated through fantastic, sweeping imagery that is worthy of a big budget Hollywood production. Ground Zeroes also fixes one nagging flaw that has plagued the otherwise fantastic cutscenes of the series. In previous games, the brilliant action on the screen was often 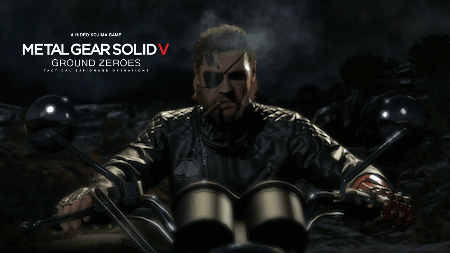 hindered by poor voice acting or unnatural dialogue. Ground Zeroes moves past this by having its characters speak and move naturally during the course of the story. You are witness to the machinations of Big Boss, an anti-hero of sorts who, long ago, was disillusioned by the US government and set out to establish a military force of his own. This time around, players will immediately recognize Kiefer Sutherland, who replaces David Hayter as the voice of Big Boss. While you might have gotten used to Hayter’s voice, Sutherland brings a more realistic and nuanced performance to the table. Irrespective of what platform you play Ground Zeroes on, the visuals are fantastic and the cutscenes are a true feat of design and direction, embellished as they are with beautiful lighting effects and detailed rendering.

You start the game off needing to infiltrate a high-security military base on an unforgiving rainy night. You have to analyze the environment and look for cues to discern where you might need to go. You’ll need to listen in on conversations, tiptoe around guards and wherever necessary, you’ll have to use force to get the information you need to move on. Ground Zeroes takes a little bit of inspiration from the Dead Space series by making the HUD incredibly minimalistic, thereby creating a more immersive experience. When you’re infiltrating an enemy base in real life, you probably won’t be seeing your health bar on the screen, right? Metal Gear makes sneaking around, ninja-like through your environment a lot of fun. But unlike previous games in the series, here you won’t have too much fantastical gadgetry to make your job easier. You have to spot the enemies you want to track, mark them with your binoculars, and only then will you be able to see where they’re going. Even so, you cannot turn a corner blind, because there might be a guard (or ten) that you hadn’t spotted before.

Being stealthy will keep you out of trouble for the most part in Ground Zeroes. But, if you are spotted, the game introduces a really interesting mechanic. In the miniscule moments that an enemy spots you, time slows down, and you have to make split-second decisions about disabling the enemy before he raises the alarm and brings down an entire squadron upon your head. You can choose to knock him out via a melee strike, or go old school and put some lead through his brain. While this system might seem like a bit of hand-holding, it provides a good transition into the somewhat unfamiliar elements of this game.

Unless you are the reincarnation of Solid Snake and Agent 47, you will be spotted during various points of the game. If you’re not able to quell the threat in time, alarms go off, and all manner of enemies will descend upon the location where you were spotted. Some of these enemies are driving around in armored vehicles, so it’s not always the best strategy to indulge them in a full-on firefight. Even if you manage to get away after the search teams arrive, the enemies throughout the base will remain on high alert for a certain duration. In previous Metal Gear games, you had an on-screen indicator which gave you this precise information. In Ground Zeroes, the game plays this scenario more realistically. Now, you will have to listen carefully to radio transmissions to know when your search has been called off.

This mechanic is consistent throughout the game. You’ll have to listen to your in-ear radio carefully at all times if you don’t want to miss information that is crucial to your survival and the completion of your objectives. Since you don’t have a base wide radar system that tells you the exact location of all your enemies, you’ll have to keep monitoring the radio to find out what’s happening. This makes the overall gameplay of Ground Zeroes far more challenging and rewarding since you actually feel the tension of infiltrating a military compound. If you want to challenge yourself even more, you can turn off the reflex system and the enemy marking features and try to beat the game.

The rating you get from each of your missions will depend upon how much of a footprint you’ve left along the way. Stealth and avoiding detection will earn you more points than going Rambo through a mission. Higher ratings will grant higher rewards, such as better weapons and different mini-scenarios in the midst of missions. That being said, if you don’t really care about sneaking around and just want to run in and be a badass, the game allows you the option to do that. Since you are in the middle of a military base, there are loads of weapons and ammunition you can use to wreak havoc. Tired of hiding behind a barrel and tracking a group of enemies? Procure an RPG and blow them all to the great beyond. In fact, some missions will require you to play the action hero as you assassinate criminals and shoot bullets out of a helicopter.

This combination of stealth and action makes the entire experience feel more rich and diverse. The silence of the night can be disrupted at any moment by the sound of alarms, guns and explosions. In other games, this kind of dynamic would feel scripted, but Ground Zeroes leaves the choice up to you. You have to choose whether you want to kill someone, knock them out, or avoid them entirely. This sandbox scenario of infiltrating a military base in multiple ways is always entertaining. While there’s not much meat here in the story department, Ground Zeroes does offer up a few hints of what is to come in the future. Even though you’d think that basing a game in a single location is a recipe for disaster, Ground Zeroes manages to transcend the cliché and delivers a tense, cinematic and highly rewarding experience throughout.