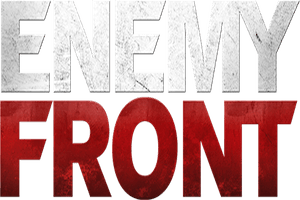 There was a time when WWII shooters were the rage. You could turn in any direction and find anywhere from one to five WWII shooters staring you in the face. The reason for their popularity was clear – the source material was incredible, and there were many moments that were tailor-made for great first-person shooter action.

However, the deluge of games drowned the market 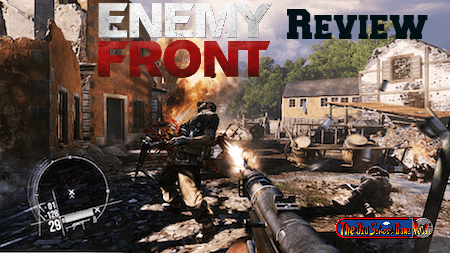 and saturated gamers. Now, many years later, Enemy Front attempts to tackle the WWII shooter genre again. When you start the game, the loading screens show different intense moments from WWII history. Unfortunately, the game is all downhill from there.

You play as Robert Hawkins, an American journalist who has been so influenced by the war that he’s turned into a freedom fighter. You’ll play as Robert through a series of missions, most of which have you accompanying a small team or a large squadron. You play through a lot of different locales during the story, but most of these make logical sense geographically. You don’t have missions in places that it would have been impossible to reach during the timeline of the game for someone who starts off where you do in Europe.

As a reporter, you’d expect that Hawkins would be good at delivering speeches, especially those of the motivational kind. Unfortunately, the game bungles both the presentation and the delivery of these moments. As a result, what could have been a stirring emotional journey turns into an unintentionally hilarious one. If the character of Hawkins was voiced competently, you could ignore the few leaps in logic that the game takes in showing his character progression. It’s also puzzling to see that Hawkins struggles with the idea of seeing who the good guys are in the war for such a long time.

The game is a WWII shooter, and it’s no surprise that you will be killing a ton of Nazis. The visceral thrill of getting to eliminate more Nazi bad guys is one of the very few things that keeps you motivated to power through the campaign. You have the usual FPS tropes at your disposal – eliminating multiple enemies with a single bullet, bouncing grenades off wall to blow up unsuspecting enemies, and lighting up flammable objects in the environment to send more Nazis flying. The game also borrows a few elements from Sniper: Ghost Warrior in its sniping sections. In fact, when you’re playing with the sniper rifle, it’s easy to mistake this game for the aforementioned one. While you’re allowed to play with whatever weapon you like, most missions are best served by playing as a sniper.

In places, you’ll see glimpses of what the developers were trying to do. For example, you can pick missions of your choice. Some other levels employ nifty physics based ideas that the game unfortunately abandons completely later on. Whether it was due to budgetary constraints or simply biting off more than the developers could chew, this game would’ve been much better off if it followed through with these innovative ideas.

The maps in Enemy Front are large, and at first glance they might seem to have the same flexibility in executing your missions as a game like Dishonored. But when you’ve suffered through the game’s tardy checkpoint system and made your way across the same ruined French landscape a dozen times, all of your illusions will go out through the window. The enemies in each section of the map act in exactly the same way every single time you are treading through the terrain. If you’ve played a lot of shooter games, you will be able to maneuver through these sections easily. In another of the game’s failed ideas, there are some sections that are supposed to cater to stealth gamers, but these are extremely poorly designed. Stealth kills take way longer than melee kills and leave you vulnerable to detection. So when you’re faced with a choice, you’re better off skipping the stealth and going for the melee kills every single time.

The multiplayer mode is somewhat better, but only in contrast with the mediocrity of the rest of the game. The online modes generally run pretty smoothly, even if you can only play in generic deathmatch or conquest scenarios. Weapons spawn at exactly the same place every single time, so you can expect to see a lot of rocket-launcher camping.

Enemy Front is a thoroughly unremarkable game. It tries to juggle a lot of different balls, but doesn’t do a competent job with any of them. You could be mistaken for forgetting which generic WWII shooter you are playing midway through the game. If you’re terribly nostalgic about WWII shooters and desperately want to kill some Nazis in Europe, you might want to give this a try. But for the most part, you will be better off revisiting some of the old games you liked, or even trying something like Wolfenstein: New Order, even if it isn’t exactly the most accurate recreation of history.

Enemy Front Review - Xbox 360 - Playstation 3
Get straight to the source and read why the last of us has cleaned up on video game awards since it's release in this review by The Old School Game Vault.
Written by: Brandon Perton
Enemy Front
5.5 / 10 stars
Facebook Twitter LinkedIn Pinterest Reddit
Tags:
Xbox 360 Review PS3 Review
Love Playing Capcom Games? Check Out Super Ultra A...
Legend of Zelda: Skyward Sword Review Nintendo Wii