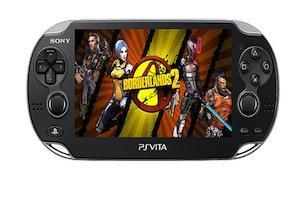 If you played Borderlands 2 or any of its DLCs on the PC or other consoles, you’ll have noticed one thing immediately. Borderlands 2 is a massive game. It has a plethora of quests, locations to explore and loot to hunt for.

When you consider the sheer size of the game, you might be skeptical about the possibility of being ported to less powerful platforms. And yet, Borderlands 2 has arrived on the PlayStation Vita largely in one piece, retaining most of its core elements while making the necessary adjustments to fit on the less powerful console. While the developers have done an admirable job of bringing over this behemoth to the Vita, there are 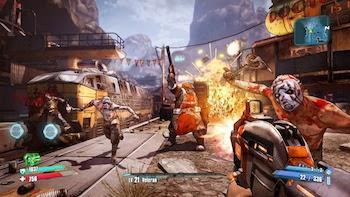 places where you will realize the corners that had to be cut to make it happen. Without a doubt, this is the least impressive version of Borderlands 2 you can expect to play. The sound effects and character voices often sound bland, and there are loads of frame rate drops during action sequences and firefights.

That being said, much of what makes Gearbox’s game great is still present on the Vita. There’s a sprawling, diverse world to explore, plenty of colorful characters and dialogue, and lots of great gear to get your hands on. The combat, while occasionally dragged down by frame rate drops, still manages to be exciting and entertaining. Much like the original game, Borderlands 2 on the Vita is much more fun when you have another player to co-operate with as you work your way through the world. You can invite a friend over and spend a lot of time relaxing on your couch as you scavenge for bounty in the world of Pandora.

A lot of ports are dragged down due to the less than ideal control schemes. Since the Vita has less buttons than other platforms, the developers have created a control scheme that relies on the touch pads in combination with the buttons on the Vita. A lot of major functions, including some combat maneuvers, are now mapped to your touch pads. You might find yourself missing an important action or two in the heat of battle because your touch pad failed to register your actions. But this kind of mishap is very rare, and more often than not you’ll be able to handle the controls sufficiently well.

If you’ve played the game on other platforms, you might have noticed that the shooting and combat is much more forgiving and less strict than other shooters. This is largely due to the general nature of the environment itself, and the enemies that populate it. This forgiving nature makes it a more suitable experience for touch screens, than say, something like Counter-Strike or Quake would be. By their very nature, shooting controls on touch screens are imprecise and you won’t be hitting headshots left and right immediately when you start playing on the Vita. However, once you get used to the way the aiming works in this particular version, you will be able to tinker around with the sensitivity settings a bit to find your sweet spot. After you’ve been in Pandora for a while, you will finally be able to hit some long range headshots that will leave your enemies stunned.

Combat in Borderlands 2 is never boring, simply because of the sheer variety of the enemies that you will face. There are the psychos who bull-rush you without a care for their lives, and the lizard-like foes that bob and weave and strafe on their way towards you. As you progress, you’ll come across even tougher foes – shield wearing foes that have giant flamethrowers, robots who are capable of building other robots and even midgets who leap out at you from unexpected corners with shotguns. Your weapons against these enemies are a variety of guns that you find in the environment, but there’s a twist. Each and every gun you find is almost endlessly customizable – you can add scopes, silencers, different ammo types and even special elemental damage. In addition, you have grenades, shields and your own character’s specific abilities to combat your foes. All of these elements put together make for a relentlessly interesting run through the landscapes of Pandora.

Unfortunately, as mentioned before, the Vita shows its limitations when large-scale firefights break out. There are frequent frame rate issues and jerky movements. In situations where you’re surrounded by a dozen baddies, the occasional second lost due to a jerky frame rate can mean the difference between life and death. These situations are even more pronounced when you’re handling a weapon like the sniper rifle, which has a low rate of fire and requires precise aiming. But since these issues are occasional, you can still enjoy a few hours of shooting, questing and looting with a friend. Curiously though, there is no local multiplayer option. You will have to get online in order to play with a friend. Borderlands 2 really shines in co-op mode, and if you can, it’s highly recommended to play the game with someone else. If you run into someone that talks too much or shares too little however, you might be up for a less than fun time.

While Borderlands 2 stretches the Vita to the absolute edges of its capabilities, the cracks only show in a few places during the game. Largely, this port of Gearbox’s great game remains enjoyable and has most of the charm of the original. The Vita version has a few DLCs and some bonus content that you can enjoy. In addition, if you’ve been playing on the PS3, you can transfer your saves over to the Vita. If you’re looking for a great shooter on the Vita that promises hours of fun, check out Borderlands 2.