I certainly remember playing BurgerTime in the arcade at maid rite back when I was younger. The concept behind burgertime is rather silly, but it’s a simple concept that works.

The game is about building burgers, and avoiding the monsters along the way, and your character is a chef. This game was released in the early 80s for arcade, and you can find copies of the game on Atari 2600 and the Intellivision video game consoles well before the Nintendo NES release.

Burgertime is like a puzzle or a simple maze game; you need to run over all the layers of the burger. Generally, it works best to make your way to the top of the level and run over all the layers of the burger making your way down through the maze. The whole time you are trying to run over the layers of the burger, there are monsters trying to attack you. The monsters resemble that of pickles, eggs, hot dogs and so forth. The only way to stop a monster from attacking you is to shake salt on the monster. Sprinkling salt will stop the monster in his tracks for a few seconds; it stuns the monster, if you will.

This is why I call the game a puzzle or a maze genre, you see the layers of the burgers, but you need to strategically climb ladders and avoid the monsters. The monsters seem stupid; they climb around the screen in all different directions. If you happen to run over a layer of the burger while a monster is stunned or below the burger layer, the monster will die.

Directional Controls are key in this game; the use of the directional pad is life or death. You need to quickly be able to stop on a dime and change your direction very quickly. The “A” and “B” buttons sprinkle the salt on an incoming enemy. You do have the option to play a (1 player game or a 2 player game). You do not have the ability to play at the same time, as soon as player one dies, then player two starts to play.

I didn’t beat this game, it just seems like a non-stop maze of levels. Some levels are definitely harder than others. Like I mentioned before, the BurgerTime works due to its simplistic nature and addictive gameplay. 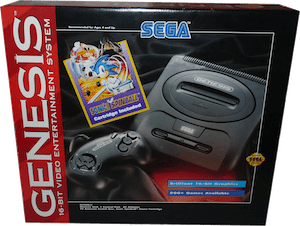