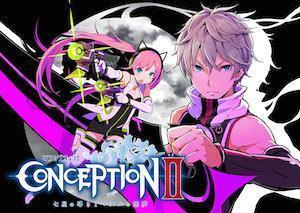 Boy meets girl. Girl meets boy. Boy and girl fall in love. Boy conceives a host of badass children with girl and together, they head into dungeons and fight off dangerous monsters. Wait, what? Yes, you read that correctly.

Conception II is a weird, weird game. The central idea of the game is to spawn a whole squad of children, often with different mothers, and then lead them into battle. Think of it as a Sims meets Final Fantasy, only the resulting mix is not nearly as good as any of the two.

Is fairly standard, for a Japanese role-playing game that is. There are dark portals opening up all over the world and all kinds of demons and awful creatures are getting through. You are one of many teenagers who are given special abilities for fighting the aforementioned monstrosities by a star god. But that’s not all. In order to fully realize your monster-killing potential, you must attend a special school with other gifted teenagers. Yes, you may insert your favorite X-Men reference here. But unlike Xavier’s school, here, the objective is to mate with a 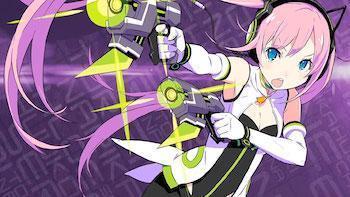 female student and conceive children that are imbibed with magical powers. The mechanic of mating with a female student is creatively titled ‘classmating’. And you aren’t just limited to one or two children. No, in fact, you can have up to nine children, all with different abilities, conceived from different mothers. These little monster-hunters work together in groups of three.

When a child is born, they are assigned to one of several different classes, such as hunter, magician or gunslinger. As you can probably guess, each of these classes are capable of using different types of armor and weapons. In addition, as the child levels up, it gains access to more powerful abilities. While you can choose to take along only gunslinger children on your battles, it’s usually a better idea to mix things up a bit. In addition to their original class, each child can also work with a certain element such as water or fire, and this adds an extra dimension to their fighting prowess.

Once you’re done with your classmating and you have enough children, you can start the actual monster-hunting. When you arrive at a portal, the game puts you in a familiar turn-based combat situation. Your children operate in groups of three, so you have three separate groups of children that individually function as a single party member. In addition, you and your mate are in one group, bringing the total to four. You can then attack, defend and use your spells appropriately to vanquish whatever foes you might have before you. The battles take place in random locations that unfortunately have very little variation between them. The environments aren’t too stellar, and are filled with bland textures and uninspired design.

There is one thing about the combat that Conception II does differently. All four groups in your party stand in specific spots during combat, and some of these spots are weak spots. Your attacks do more damage if you hit the enemy from a certain direction, so winning is often just a simple matter of understanding which direction is an enemy’s weak spot, and then moving your maximum attack power to that spot. You also have abilities that stack up in power as you keep attacking, such as the chain drive. This specific ability will allow you to temporarily chain or shackle a monster while the rest of your team pummels away at it. You also have an ether meter, which is an indication of how fast your party is currently able to move. Unfortunately, none of these abilities really mesh together into anything coherent. The early battles will hardly ever require the use of your chaining abilities, for example.

The other part of the game is the relationship, dating and ultimately, conception aspect. The stronger the relationship you have with your mate, the more powerful the children you create together will be. There are a total of seven heroines, and you must get to know them well if you want to have a party of powerful warrior kids. The game starts off the dating aspect fairly innocently, and the parents blush and hold hands while they speak to each other. But on the other hand, the dialogues are filled with sexual references and innuendo. There are conversations alluding to bust sizes, touching and there’s even the stereotypical perverted priest to add to the mix. There are rare, fleeting moments when the game expounds on the immature, hormonal and passionate nature of teenage sexuality in a mature manner, but then it immediately inserts some double-meaning dialogue to ruin the moment. It feels like the writers were high-fiving themselves about their cleverness in inserting sexual innuendos into every possible situation.

It’s not like the dating aspect of the game is too deep either. Most of the heroines have one-dimensional personalities and it doesn’t take a genius to figure out what a certain person might need, because they keep alluding to it in their conversations. For example, there is a heroine who keeps talking about her love for photography, and you have the option to gift her a camera badge. You might finish the game with every single one of the game’s heroines in love with you. And while this might be some enjoyable wish-fulfillment for a hormonal teenager, it does no service to furthering the cause of actual, mature relationships. The problem with the game’s flat character storylines extends to the central plot as well. It’s too generic, and the English dubbing of the Japanese dialogues is laughably bad.

Conception II has a novel idea at its core, but it fails to develop it into anything meaningful. The combat is uninspired, and if you’re so inclined, you can even choose to let the battle play out on its own without having to intervene, provided you’ve configured your party tactics correctly beforehand. The game tries to balance two different kinds of role-playing mechanics, but doesn’t do either one too well. If you’re looking for a role-playing game to while away a bit of time with, there are better options available on the Vita.