In Diablo III, you battled your way to the high heavens through hellfire and brimstone. You tangled with angels, demons, sorcerers and legions of unholy demons, critters and monsters. Under the unforgiving skies of the heavens, you fought Diablo for the very fate of the world itself. With tremendous difficulty (and the right items and skill build) you managed to defeat the greatest threat this world has ever faced. Where would you go from here? Glad you asked.

In Diablo III: Reaper of Souls [Reviewed Here], you fought an even more terrifying enemy – the incarnation of Death itself. After you’ve managed to beat unbelievably terrifying monsters such as these, you might wonder what the Ultimate Evil Edition consists of. Well, this version is the result of all of the beta testing, user feedback, bug fixing and content updates that have gone into the game since its release.

Blizzard isn’t known for creating fun, happy, Disneyland adventures. Their tales are singularly dark, depressing and filled with despair. It is to their credit that they’ve managed to make so many incredibly bleak stories into brilliant games that string players along to the very end. Diablo III is no exception – when you aren’t actively engaging in killing all kinds of monsters, you’ll be talking to people about other people that have been, or are going to get killed by said monsters unless you do something about it. Reaper of Souls took the fantastic art direction in Diablo III and turned up the bleakness even further, having you trudge through wastelands riddled with corpses.

In Diablo III, it pays not to get attached to any item you find. Sure, that sword or that armor may look great and please your inner connoisseur, but you have so much looting to do, that you’re bound to find newer, better items very frequently. The game manages to make the looting process seem worthwhile by giving you the option to sell your old items for gold, or getting them to the blacksmith for salvage. If you’re particularly fond of an item, or find one that your friends can use, you now have the ability to store and send items. The looting is central to the Diablo series of games. It always has been.

Having your friends think you are cool because you mailed them some item they needed isn’t the only reason you should pick up this edition either. If you like to play multiplayer games, you will be amazed at how accessible the Ultimate Evil Edition is. Whether you’re starting out or have invested a lot of time into the game already, you can find a group of players to further your quest. Low level players can tag along with more experienced ones if they want to power level and get better items, faster. If you could care less about the story and just want to play a boss battle, you can join a friend that has reached a checkpoint adjacent to one. This kind of system allows more players to get interested in the game by looking at the highlights before they start to appreciate the finer points. You also have a grand total of 10, yes, you read that correctly – 10 difficulty levels. Diablo III has something for even the most hardcore, sadistic role playing gamer out there. The higher the difficulty level, the more powerful the gear you can find.

Everybody loves kill streaks. If you’re a MOBA player, you might have gotten addicted to the “Triple Kill” or “Ultra Kill” chants. The Ultimate Evil Edition gives you the ability to have a killstreak. After you’ve killed 10 enemies within a short span of time, a timer appears that counts down unless you can continue the streak. If you’re in a crowded dungeon, you can achieve massive kill streaks, which means large experience multipliers. If you’ve wanted to indulge your inner genocidal maniac, Diablo III now gives you the option 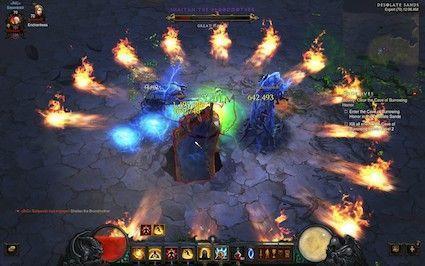 This edition also features a lot of subtle interface improvements, fueled no doubt by feature requests and forum threads full of flaming ever since the PC version was launched. Now you can browse through new loot that you just bagged much easier, therefore making it more convenient to drop stuff your friends might need. If you’re playing the game with a friend on the same screen, each item you get is also marked with the specific character class and player it is appropriate for, therefore making it easier to discard stuff that your character won’t be able to use. You can run around, smash things to your heart’s content, and not worry so much about picking up the wrong stuff anymore.

In top-down hack-and-slash games, developers can often buy into their own hype when it comes to creating massive worlds. When you look at a game like Diablo III, you realize how much finesse and attention to detail a hack-and-slash game can actually exhibit. While the maps are large, there aren’t too many sections where you don’t have anything to do, or sections where you are just walking for 5 minutes because the developers decided they wanted to have a big map. You’re always in the action, killing stuff, exploring stashes or leveling up. Diablo III rewards you handsomely for leveling up, so you always have the motivation to get to the next level.

Diablo III: Ultimate Evil Edition is the most refined and polished version of Diablo III. The comprehensive list of improvements that has been made to the game over time make this a flawless experience. There are little to no load times between maps, and even when the screen is full of monsters casting spells and dying messily, there are no frame rate drops. Combine all of this with the Crusader class that was introduced in Reaper of Souls and is now playable right from the start, and you get a fantastic package. If you haven’t jumped on to the Diablo III bandwagon yet, you’re lucky, because this is the best version of it. If you’re a fan or RPGs or good games in general, Diablo III: Ultimate Evil Edition is an absolute must-have.