The first Disney Infinity game was a curious beast. On one hand, it had the Toy Box mode which in theory, offered players endless possibilities to create their own worlds and build their own minigame adventures. On the other hand, the Toy Box mode lacked the customization options to match its epic scale. Players were often confined to 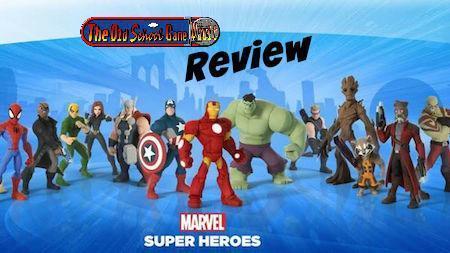 making bad platformers or inferior versions of SimCity. It was tough to completely feel like you were in control of the sandbox because you didn’t have enough tools to play with.

There are tons of new options that allow you to take control of your own sandbox universe and build whatever takes your fancy. You can build a racetrack, a platforming game or even create your own genre of gameplay, if you feel up to it. The tool itself is now more accessible to newcomers – it offers you varying degrees of assistance depending upon your skill level. If you want it to, it will hold your hand the entire way as you create your first world. Or you could just turn all the assists off and create something from scratch. There are still things that Disney Infinity has unfortunately inherited from its predecessor – a lackluster and occasionally buggy campaign, poor frame rates and miscellaneous technical issues. Luckily, the best thing about the Infinity games – the Toy Box, has been made even better.

With Disney’s acquisition of Marvel, they have an incredibly rich universe and a plethora of interesting characters in their arsenal. Marvel Superheroes Edition starts you off with three members of the Avengers – Thor, Iron Man and Black Widow. You also get one play sets (the previous game had three) and two games created using the Toy Box tool. Infinity is part of a new group of games that uses physical objects to unlock digital rewards. Nintendo’s amiibo and Skylanders are some of the other games that have utilized this feature. Last year’s Infinity was somewhat limited because you needed to buy compatible characters for different play sets. This year, Disney has remedied that by making all of the characters that come with your starter pack immediately playable. So you can play along with your kids if you want to, without having to spend any extra money. If your kids are fans of the Avengers, you might have to spend a little more money, but you don’t absolutely have to.

The major play set is an action game that is set in a quasi-open world environment, and has a pretty basic plot. The Frost Giants, under the leadership or Loki are trying to take over New York for some reason, and the Avengers have to foil them before they achieve their goals. These campaigns have traditionally been rather uninspired, and this one continues that unfortunate tradition. You’ll mostly be stuck doing repetitive missions that involve saving civilians who needlessly put themselves in harm’s way. The game’s version of New York is pretty bland and you’ll notice a lot of repetitive textures and building geometry. For a game that isn’t very graphically appealing, it’s surprising to see how often the frame rate drops.

These technical concerns probably don’t cross your kids’ minds however, and they are the target audience of the game. Marvel Super Heroes is a simplistic game that is catered to those under the age of 10. While you might look on and roll your eyes as you see the same civilian texture 10 times around the city, your kids will be having fun playing as the Avengers. It’s a great way to share an activity with your kids as you both go through the storyline of the game together. The Avengers look appropriately detailed and colorful, both in their digital and their physical forms. You won’t have to worry about accidentally shattering the toy figures by dropping them. They are quite 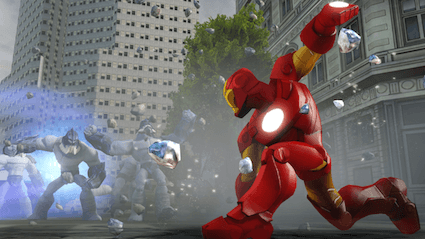 Iron Man flies around in his suit, Thor pummels foes with his lightning attacks, and Black Widow kicks ass with her expertise in close quarters combat. Black Widow is the least fun to play with here, since you can’t fly to get to places. A superhero that needs to take the elevator? Pass.

Each of the characters levels up and gets additional abilities and upgrades by spending skill points. You can also use any of the characters from the previous Infinity game, if you so wish. Even if you don’t have children around the house, you can still get a lot of value out of the Toy Box mode. Your imagination is your only limiting factor here, and you can create a tremendous variety of experiences. You can create racetracks, platformers that take place on rooftops, RPGs, treasure hunts and more. It’s easier said than done however, since creating a complex adventure through the Toy Box mode requires a lot of skill. The tool is extremely powerful and provides you with several templates as starting points, but you’ll have to dig in deep if you want to create something truly unique. The initial assistance is a welcome change from the old Toy Box mode, which was just intimidating. The Toy Box games that come with your purchase will convince you of the capabilities of the Toy Box. You get a tower defense game, and a dungeon RPG.

There are occasional frame rate drops, and sometimes the Toy Box will crash completely. You also have to unlock tools in the Toy Box mode by playing through the main game and completing different tasks, which is a minor annoyance. However, the children you give this game to wont care about complex technical issues. They’ll have plenty of fun exploring the digital realms that you and the developers have created for them. You can even get some directions if you have your son or daughter alongside you while you create the next adventure for them. Disney Infinity: Marvel Super Heroes 2.0 Edition, for all its flaws, is a testament to the power of gaming and imagination. It is a wonderful gift you can give to your children, and through them, you might just pick up a couple of life lessons for yourself.