Mixed martial arts, or MMA, is the fastest growing sport in the world today. Through the inception of MMA, we’ve finally been able to settle our barnyard debates about Karate vs. Kung fu, Boxing vs. Taekwondo and others that remained a matter of theory until it came along. And in 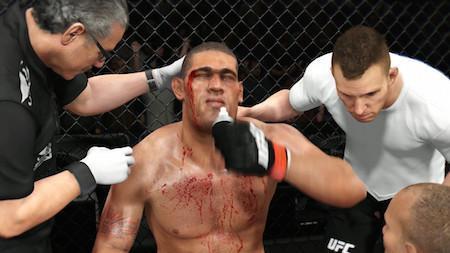 today’s day and age, the UFC has become synonymous with MMA. With a rabid fan base, expectations for EA Sports UFC were huge, and while the game delivers spectacularly on the visual aspect of the UFC, the combat mechanics unfortunately fall a bit short.

As mentioned before, the game looks positively amazing. Fighters bruise up realistically over the course of a fight, kicks and punches react with skin and muscle like they would in a real fight, and you can see the muscles straining as the fighters try to escape a tough choke. But when you actually start to play the game, the charm of seeing the hyper-realistic graphics quickly gets old. There was one thing that the THQ series of UFC games captured spectacularly – the unpredictability of fights. At any moment, a fighter could get caught with the perfect hook that would end the fight in a heartbeat. Or you could be dominating the entire fight, only to get caught with a tight armbar in the final seconds and have to tap out. EA Sports UFC misses this critical element of fighting. Most of the time, you aren’t in too much danger of a sudden knockout and shots that would surely end a real fight are often eaten by fighters without too much strain. In real matches, a grappling artist would be able to subdue an opponent on the mat with sheer skill, but this game allows you to escape such positions with a single button, leaving the grappling aspect criminally underserved.

This game promotes the kind of fight Dana White would enjoy the most – a standup battle. By and large, fights take place with both opponents on their feet. It’s on the feet that you can land spectacular counter-strikes, jumping knees and devastating uppercuts. Finishing a fight isn’t easy, but the fluid animations make the hard work worth it. Your punches and kicks land properly, and there aren’t any weird hit detection issues that would break your suspension of disbelief. If you want to go all Diego Sanchez and rush in swinging wildly at your opponents, the game rewards you by making sure your punch impacts feel suitably visceral.

Since the takedowns and ground attacks are generally easily countered, even the AI and most players you will meet online engage you in standup battles. In a real UFC fight, you won’t normally see someone who’s been fully mounted muster the strength to buck his opponent off cleanly, and then roll over and mount them instead, but it happens regularly in this game. Reversals are too easy, and it takes away from the complexities of the leverage and positioning maneuvers that grappling and jiu-jitsu are based on. However, if you can keep your opponent down for a long enough time, you can manage to eventually slip in a submission. Submission scenarios produce an octagonal display on the screen, where the fighter who’s getting submitted tries to push one of the corner indicators all the way out, and the fighter performing the submission tries to get the limb into a position where the opponent has to tap. These indicators are based on how strong each individual fighter is at performing submissions or defending against them, and also how much stamina they have left.

In what was possibly a design choice made to make the game more accessible, this one-button blocking mechanism extends to punches and kicks as well. You can block kicks to any part of your body - the head, the midsection, and even your legs, by pressing a single button. Keeping the block button pressed stops the stamina regen, but that is a small price to pay for staying in the fight. This is another mechanism which takes away from the realism of EA Sports UFC. In an actual fight, lots of fighters pepper their opponents with kicks to the legs and the body to get them to lower their hands, so that when they least expect it, they can end the fight with a punch or a kick to the head. Here, your offence is basically muted by your opponent holding down a single button.

Thankfully, this tactic isn’t employed too often by your AI opponents. They’re looking to finish the fight too, and the tactic with the most chance of success is to stand and trade blows with them. If you’ve got even moderately decent reflexes, you can knock most opponents out by baiting them into a standup exchange, blocking when they throw and just swing for the fences when their defenses are down. Even on Hard mode, you will likely win most of your fights by just doing this.

Allows you to create a fighter and help him rise through the ranks until you finally become a champion. While this sounds like an exciting prospect if you’re a fan of the UFC, the way the game implements this is rather drab. Your training sessions consist of individual drills that are a chore to complete. While these drills might be an integral part of a real fighter’s preparation, here they just bring the pace of the game down to a crawl. In addition, sometimes you’ll be presented with obviously acted video interludes from fighters in the current UFC roster.

Is definitely where you are likely to find the most excitement, since playing against a human who knows the systems of the game as well as you do is the only way to achieve an acceptable level of challenge here. The career mode falls short to achieve this objective.

EA Sports UFC is a fantastic looking game, and the new team behind the franchise has certainly done their homework here. In future iterations, it would be great to see the game diving deeper into the ocean of MMA and creating a more complex, diverse and intuitive combat system. It would also be great if there were more game modes and unlockable content. So if you’re looking for a UFC fix but don’t want to play the old THQ games, step inside the octagon with this one.