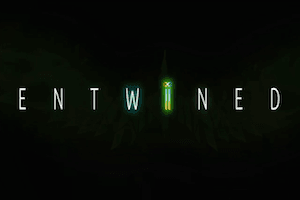 Increasingly, we are beginning to see a new spate of games and movies that are primarily meant to be an experience. Entwined is one such game. It’s a visually gorgeous experience, with oddly calming and haunting melodies, and it will mean different things to different people. It’s a different kind of game, one based on the themes of eternal love and separation, and it’s presented rather abstractly. It’s a great trip, pun intended, even if it’s a criminally short one.

Ancient Chinese lore speaks of two souls that are destined to be in love forever, but never united. Entwined represents this theme by presenting two different characters that occupy different halves of your screen. On your left is a fish, swimming along, and on your right is a bird, soaring through the maze of geometrical patterns and colors. The right side 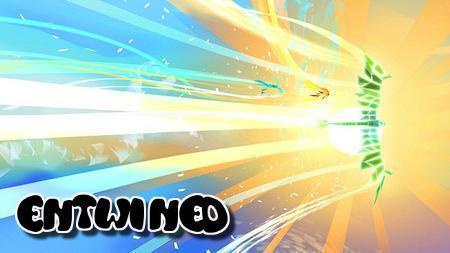 represents the air, and the left, the sea. Occasionally, when you move the characters close to each other through the natural course of gameplay, they glow and chime, as though they’re ecstatic to be this close to each other. But they’re never able to make the trip to the other side. The fish is confined to the left side of the screen, and the bird is confined to the right. You travel through levels that are made up of abstract colors and patterns and attempt to reach a state of unity. You have to collect floating orbs that appear on the screen. Each time you collect an orb, two meters at the top of the screen which represent the two characters float closer to each other, until you finally are able to be entwined and turn into a glorious, colorful dragon that is able to float freely through the sky.

There is no story to speak of in Entwined. The campaign mode leads you through nine different stages which are supposed to embody nine lifetimes. Each lifetime is thematically unique, and is accompanied by unique level geometry and music. Some levels are slower, more contemplative, while others are more upbeat, joyous and urgent. The melody of the game defines the way the environment comes into being. If you’ve played rhythm based games before, you will be at home with this concept. What Entwined does differently is challenging you to control two separate characters on the screen. You control the fish with the left stick, and the bird with the right. You have to move them to collect orbs that appear in their respective sections. This is a game that requires quick reflexes.

Even though the nine different levels have been created to embody different themes, they don’t affect the gameplay in any way. All of the levels play the same, and you have to perform the same left and right stick movements to get through them. The control scheme isn’t too tough, since most of the time you’ll only have orbs appearing on one side of the screen. It’s when the lifetimes converge and morph into a wonderful fantasy world that the different lifetimes truly show their nature. You will be able to soar through the skies of diverse locales such as a brightly-lit fair, or a somber glacial landscape with your dragon. The completion of each lifetime allows you to draw a diverse pattern in the air, and as you finish drawing it, it comes alive with color and geometry. It’s all very beautiful to look at. There are moments where the themes of long-lost lovers uniting for a brief moment at the end of a lifetime resonate with you, but these moments are fleeting. As mentioned before, this isn’t a traditional mission-based game.

The challenge mode is slightly more challenging than the normal story mode, since it only gives you three lives and every single time you miss an orb, you lose a life. In order to unlock the next challenge, you have to remain alive for a specific period of time. There are online leaderboards that help you to track your progress and compete with other users online. But competition or skill isn’t what this game is about. This is one of those experiences that you can relax into at the end of a long day, when you just want to put your headphones on and get lost in something else for a while. The music and the beauty of Entwined’s visuals shows the kind of experience games are capable of providing, and do away with the traditional shooter or RPG tropes. It’s a calming, meditative, often emotional experience that will take you out of the stress of your day-to-day experience and allow you to just be happy for a while.