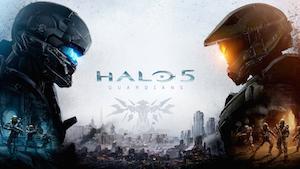 Put on your helmets and prepare for battle. Halo 5: Guardians is finally here. It takes a lot of risks and in a game about intergalactic warfare, Halo 5 boldly goes where no Halo game has ever gone before. Some of the chances it takes don’t always pay off, but when you’re fighting through massive islands, mowing down enemies and warping through black holes, it’s tough not to crack a smile.

Developer 343 Industries took over the FPS juggernaut for its first major title – Halo 4, back in 2012. Since then, they’ve learned from their mistakes and Halo 5 hits all of the right notes for a Halo game. This outing features more mobile Spartans, a slightly more open-world design and several new multiplayer options. The campaign sees some restructuring too, with two separate teams now featuring eight characters in a battle that rages across the cosmos.

The Blue Team, of course, is led by the iconic Master Chief and three of his closest soldiers. The Osiris Team, on the other hand, is comprised of four new Spartan recruits who are still trying to figure out how to work with each other. The chemistry within the Blue Team is well-established since these guys have been in several missions together. As players who are new to the franchise, seeing Team Osiris learning to bond together offers a nice window into the plotline. Halo has a tendency to get a little too plot-heavy for its own good, and little nuggets like understanding what happened in Locke’s past or the dynamic between Vale and Sangheili are essential.

The basic plot is simple – Master Chief is being pursued for war crimes by Locke and other members of Team Osiris. This is one of the major risks Guardians takes – turning the face of your franchise into an antagonist. Unfortunately, it never really lives up to the potential of this premise. As the two teams fight and chase each other across the universe, Halo 5 weaves a plot about coming to grips with the fallibility of your heroes and the dangers of artificial intelligence. Once again, Halo 5 stumbles while trying to deliver on a good concept. Cutscenes often end abruptly and characters do things that are inconsistent with their nature. On the surface, the locales you’re fighting through are lush and beautiful. But since there’s little emotional connection to the characters you’re playing as, it all feels a little flat. Halo 5 makes a few bold moves as it careens towards the ending, but it is unable to deliver a satisfying conclusion.

Halo 5 isn’t all about shooting though. There are a few sections of the game where you will be exploring environments looking for artifacts. On your way, you’ll come across some interesting aliens who, much like you, experience boredom and pass the time with chatter and music. Several audio logs that you’ll find all over the world of Halo 5 give you some extra insight into the main plotline. Unfortunately, these sections compound the problems that plague the plot. Halo 5’s campaign relies a little too much on player’s knowledge of the extended universe, and audio logs that offer details about little known events simply add to the confusion.

Plot problems aside, Halo 5 is a remarkably good shooter. The Spartans are better than they’ve ever been before. You can unleash dive and dash maneuvers to wreak havoc on the battlefield. You can uncork a devastating smash attack at the end of your sprints. You can also glide while you’re setting up a perfect shot. Oh, and there’s now a zoom option available for any weapon in your arsenal. These changes are a marked deviation from the established Halo formula, and it is to 343 Industries’ credit that all of these changes feel seamless. These new changes allow Halo 5 to feature complex maps with more freedom of movement for players.

Like previous games in the series, Halo 5 shines when you play with other people. The co-op mode, which allows you to play with up to three other players is fantastically designed. You can analyze the battlefield, pick different weapons and strategize to bring down the enemy via a multi-pronged attack. There are missions where some of your teammates will be on foot while the others will be piloting phaeton ships. This is where Halo 5 truly shines, immersing you in the battlefield as part of a team of super soldiers. Playing with other humans also eliminates some problems with the AI, which although better than usual, still manages to mess things up from time to time.

Muddled plot and weak characters aside, the campaign in Halo 5 is filled with lots of fun moments and memorable combat. When you’re playing with other humans, the game encourages and rewards teamwork as you go to battle on several gorgeous maps. And then, there’s the multiplayer mode. Without a doubt, this is the best multiplayer experience so far in the Halo franchise. Fan-favorite modes like Capture the Flag, SWAT and Slayer are back with a twist. In a much needed change, Halo 5 offers universal weapon loadouts, dropping the ill-advised unlocking and progression system. If you’re a Halo newbie, you won’t be numero uno in Arena right away, but given how fluid the control and movement system is, you’ll become an accomplished headhunter in no time.

However, the best new addition to the multiplayer arsenal is the Warzone mode. Warzone feels like an FPS-MOBA mashup, in that you have to fight opposing players while also dealing with enemies and capturing objectives in your environment. Much like a MOBA game, Warzone maps are massive and feature neutral zones and powerful AI opponents. You’ll also have mini-bosses spawning at regular intervals. These are difficult to kill and often boast advanced weaponry. Teams have to collect 1000 points to win. Every opponent kill, AI boss kill and zone capture earns your team points. This is where Warzone shines because you’ll have to make tactical decisions on the fly, depending on how a particular match is going. Winning multiplayer matches gets you requisition points, which you can use to unlock items across three different tiers.

Halo 5 is without a doubt, a triumphant multiplayer experience. Even though the single player story fumbles in places, the combat is still exhilarating. The new movement and control system feel intuitive and allow for more dynamic fights. 343 Industries is doing a lot of things right. Hopefully, the next iteration will see the franchise finally reach the heights it is capable of as I still feel Halo 2 is my favorite.