There’s no other way to put it. Infamous: Second Son’s protagonist, Delsin Rowe, was kind of a punk. Here was a guy who at all times was engaged in some kind of behavior, which called attention to himself and his antics.

He was a stereotypical rebel. He even wore a denim west and topped it off with a beanie. If you had to create the rebel in a marketing lab, Delsin would be it. It was therefore unsurprising that he wasn’t exactly the most likeable or easiest protagonist to root for in the history of gaming. Delsin does make an appearance in Infamous: First Light, however, thankfully, his appearance is relegated to an unlockable character that you can play the challenge stages with.

Infamous: First Light doesn’t have a dearth of unlikeable masculine characters who try too hard though. The character Shane will 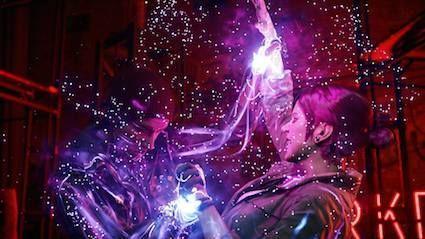 remind returning players of Delsin. It seems his singular job in the game is to be as obnoxious and sleazy as possible to the game’s heroine Abigail Walker, also known as ‘Fetch’. Shane is obnoxious to the point where he’s almost a plot device to make sure audiences are on Abigail’s side from the get-go. Not that she needs any help doing this however, since she has already had a difficult life as a runaway. In this game, Fetch is the character that is discovering how to make sure she channels her rage into her powers, now that she’s out in the open. The story and the dialogue are very generic, however, Laura Bailey, as the voice of Fetch gives her a lot of depth and charisma. The fantastic animations that have been created for Fetch also help the cause along.

Is very run-of-the-mill, and you are lead through a series of missions where you unlock new powers and upgrade existing ones. This game also features one particular mechanic that gaming in general refuses to let go of – collect ‘x’ items from different corners of the map. This is a lazy way to get players to spend more time running back and forth across the map, and in today’s day and age, it needs to be dropped by the wayside. While you are collecting glowing shards from different corners of the map, you also do normal superhero stuff, such as preventing shootings.

Your powers allow you to zip around the city at literally the speed of light. You also have the power to trap an enemy in a stasis bubble, create a gravitational black hole of sorts that pulls in enemies nearby and then eliminates them in a grisly manner, leaving scattered limbs and blood. When you have a character that is able to do these things, you have a ton of potential for fantastic setpieces. However, the game inexplicably makes her waste most of her time in sniper missions where you have to pick a rooftop and shoot neon at targets beneath you. This is a shame, because when Fetch does get to unleash her powers, it is a lot of fun to play as her.

When you’re zipping around the city of Seattle, climbing up skyscrapers, jumping off rooftops and running through neon vortexes that boost your speed even further, the game operates flawlessly. It’s a fine testament to the power of the next-gen consoles. You’re free to zip and jump around anywhere, and the only restriction you have is the actual edge of the map itself.

Unfortunately, however, the game doesn’t do much with its unique premise and characters, and quickly devolves into doing the same things every open world game has you doing. There aren’t any difficult moral choices to make, something which has been a standout 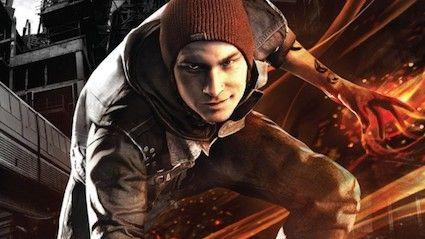 feature of the Infamous games. You’re free to disable your enemies or slaughter them at your own accord. Choosing one option over another doesn’t affect the game in any way. Delsin, in the previous game took the concept of being a superpowered being to the extreme, living out his fantasies in the world of Second Son. Fetch doesn’t get any such freedom here.

It’s only in the challenge rooms that Fetch is really allowed to unleash the full range of her powers. Even the challenge rooms are rather generic, unfortunately. You fight against increasingly difficult waves of bad guys, or you fight increasing difficult waves of bad guys while also attempting to protect civilians. However, since the main storyline restricts her abilities so much, it’s fun to have an avenue where you can see what Fetch is really capable of. Zipping around and blowing up baddies with your arsenal of neon powers is tremendously satisfying. The fluidity via which one action leads into the next makes the challenge levels even more satisfying. However, once you’ve finished the game and unlocked the full range of your powers, the challenge rooms become less interesting. Why jump around, dodging and indulging enemies in melee combat when you can just shoot homing missiles at them and earn higher scores? You can just zip around the level shooting missiles until you’ve earned enough juice to use your singularity ability and obliterate everyone. This makes the challenge levels significantly easier and far less interesting. You might even find yourself dying on purpose because you’ve been playing a level for 30 minutes and none of your enemies have even come close to challenging you.

Infamous: First Light is an entertaining game. The protagonist, Fetch, is a likeable character, even though she has been inspired by every single tough heroine in pop culture. If you want to complete the entire game, it would take slightly longer, but you can finish the main story in about two hours if you aren’t a complete newbie. Second Son was a fantastic game and First Light was always going to have a tough act to follow, but unfortunately, it doesn’t quite rise up to the challenge.