We all know the feeling. Sometimes, you just want to get together with a few friends and shoot things – in a video game, of course. Depending on which way you lean, you might like the zombie massacre in Left 4 Dead, or the frantic rush for survival in the Horde Mode that Gears of war has. Maybe you’re more competitive 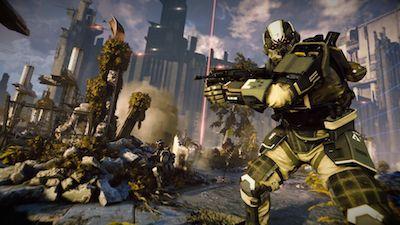 and prefer CS: GO or Battlefield instead. Now what would happen if you combined elements from all of these styles and blended them into a single game? Well, the result might be something like Killzone: Shadow Fall Intercept.

Intercept tries to do all of the above styles at once, and does none of them too well. This is not to say that it is an awful game. Quite the contrary, in fact. Intercept has a class-based system that allows up to four players to indulge in a shooting spree that is quite a lot of fun. But when you’re done playing, you will always be reminded of games that do better at the styles that Intercept tries to mimic.

The four classes are pretty much standard for this type of game – you have a heavy weapons assault class, a demolitions and traps expert, a long range marksman and a medic who can heal your team. In addition, all of these are extremely similar to a game in the same franchise – Shadow Fall. They have a few extra abilities here, like wielding drones and speed boosts, but by and large it is very similar fare. The weapon loadouts are pretty much a no-brainer once you’ve progressed through the game – if you have the ability to combine the class talents with better firepower, you’ll always go for that option. So if in time, your medic is able to wield shotguns, there’s not much of a choice to make there.

This kind of customization almost works against the game, which is a weird thing to say. In most class based shooters, the individual classes are only allowed to perform a specific kind of role and handle a specific kind of equipment, because it makes their roles more defined and specialized. When you have a hybrid mish-mash of characters, everyone is almost doing the same thing.

The game lets you win by scoring points that you gain from killing Helghast. There’s a little twist here though. In Intercept, you don’t simply score points by killing enemies. Your points only count when you go back to your base and deposit them into a points bank of sorts. This means that even if you kill a thousand Helghast, your score is zero if you don’t make the trip back to your base and deposit those points. The longer you hold on to your points, the higher you score for additional kills. However, if you die, you lose all the points you’re holding. This creates an interesting dynamic where you have to choose whether you should risk getting higher scores or play it safe and deposit your points immediately. Unfortunately, the game doesn’t execute this too well. More often than not, depositing points you’ve earned immediately greatly increases your chances of victory, thereby making the choice way simpler.

The on-screen battles also lack the flair that shooters of this age should have. When you’re on a killing spree, or have a power-up or a powerful gun, the game’s graphics should reflect this change of situation. Intercept doesn’t give you the thrill of wielding a double damage power-up for example 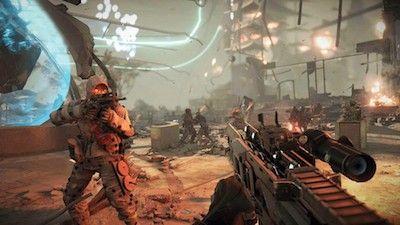 since it only reflects the status in a small icon that sits at the bottom of your screen. Your enemies, the Helghast also are apparently controlled by an artificial intelligence that adapts to your play style – a la Left 4 Dead 2. In some scenarios, they are truly formidable foes and you have to adopt proper strategy to achieve victory. Depending on which map you’re on, this might involve placing traps at strategic locations, luring the enemy in and picking them off from range. But most of the time, the AI just throws numbers at you (which might be the most intelligent strategy, come to think of it).