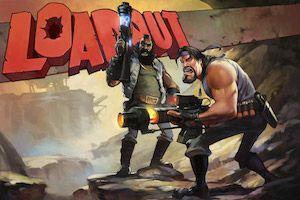 One of the blurbs which Loadout ran with described it as “Looney tunes as directed by Quentin Tarantino.” That quote is incredibly accurate. If you’ve never heard of Loadout before, think of it as Team Fortress meets Borderlands meets Quake III.

The focus of the game is combining different gun parts to create your own unique weapon and then unleashing death and destruction upon your enemies. You like to burn your enemies? There’s a part for that. Lightning with the occasional rain of spikes? Got you covered. As the concept of the game would suggest, it really shines in the multiplayer mode. The campaign is average, but once you start playing against real people online, Loadout will make your inner gun-nut chuckle with glee.

Unsurprisingly for a game that boasts ‘a billion weapon combinations’, are the meat of the game. Loadout treats the crafting mechanism well, offering you a small box that gradually fills up with different parts as you get better at crafting your own guns. If you want to create a shotgun, all you have to do is slap a barrel that scatters rounds onto a magazine loader, and fit it all into a chassis. Want to make a sniper? Swap out the scatter barrel for a high-powered round shooter, and add a nifty scope onto the barrel. To add to the fun, you can have different ammo types – lightning, nails, and fire. Yes, you’re not the only one who’s thinking of Borderlands at this point. Fear not – Loadout is a completely different game. You don’t have to focus on killing people either. You can add ammo that heals and then shoot your allies with healing rounds. If that sounds awesome, it is because it really is. Of course, if you’re one of the stealthy Agent 47 types, you might want to equip your weapon with a nifty silencer and pick off unsuspecting foes on the sly.

You earned weapon parts from daily rewards, an experience tree and by spending in-game currency. On the PS4, Loadout gives you parts as rewards for finishing multiplayer bouts or completing missions. You can also open safes, which contain randomized rewards. But there’s a catch here. To open safes, you’ll need dynamite, which you’ll have to buy by spending another form of in-game currency called Spacebux. The influx of new items is much steadier on the PS4, and it’s hard not to get excited about opening a new safe and seeing what items you’ll get from it. Obviously, not everything you get will be a keeper. It’s all about mixing and matching items to create a weapon that suits your own play style. You can also combine certain low-grade items together to create a newer, stronger item. These upgraded items can make the difference between an enemy escaping with low hitpoints and dying from your attacks. You can also name your own weapons, and prepare for a lot of hilarious moments when you see what players name their guns online. Plus, it’s always satisfying to see your gun grow from an innocuous shooter to a roaring juggernaut of death.

As mentioned before, the campaign mode is uninspired and features waves of AI enemies that you have to fight against on different maps. Once you’ve gotten over the initial excitement of learning the game mechanics, these campaign missions quickly become dull. The only reason you’ll want to finish any of them is because of the promise of new items. So yes, you’ll have to grind through the campaign mode. But it’s all for a good cause – the multiplayer mode.

Where you need to be:

Once you’re in the online arena, Loadout really shines. The controls on the PS4 might take a little time to get used to, but you’ll be shooting heads off people soon enough. The game features six maps, and all of them are completely different from each other and require unique strategic approaches. Once the action begins, it’s a fantastic frenzy of violence. Expect jumping rocket-shooters, chain lightning kaleidoscopes and limbs exploding, all rendered in a gorgeous cartoon style. The gore is extreme, so you might want to stay away if you’re squeamish about that kind of stuff. For the rest of us, it’s time to lock and load. As you survey a battlefield full of disembodied cartoon limbs while your trusty weapon fills the screen like an angel of death, it’s hard not to have a smile on your face.

There are five different game modes – death snatch, jackhammer, blitz, domination and extraction. Death snatch is basically a death match mode. Blitz and domination require you to establish control across specific points on the map. Jackhammer is a capture-the-flag variant. Finally, the extraction mode will require you to protect one of your allies while they collect blutonium and deposit them to earn points.

Loadout retains its charm on the PS4. It is an over-the-top, violent and hilarious shooter with tremendous depth in gameplay. Sure, the campaign mode isn’t anything to talk about, but that’s not what the game is about. When you’re shooting heads off people, collecting items, upgrading your weapon and repeating the process all over again, don’t be surprised if you look up at the clock and realize that it’s almost morning and you haven’t stopped playing yet.