Oddworld: Abe’s Oddysee first released on the PlayStation well over 16 years ago, in 1997. At the time, the game stood out due to its quirky, memorable graphics and a weird protagonist that you journeyed with through a harsh and difficult, but always enjoyable game.

Due to these very reasons, however, it wasn’t the most accessible game. Many gamers were turned off by the unforgiving level of difficulty in the game, which wasn’t helped in any way by the less than optimal control scheme. In remaking the old classic, developers Just 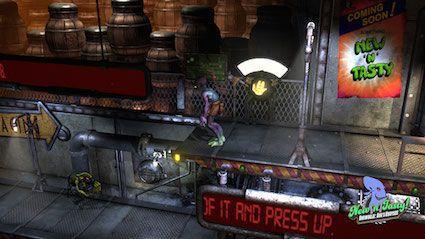 Add Water have made a game that is a decidedly better telling of the tale that the old one told. The graphics are much cleaner and crisper, the HD visuals lend a whole other dimension to Oddworld and much of what made the original game a success – the gameplay and art style has made it through intact.

Is that it thoroughly embraces the weirdness of the original. You play as Abe, an alien on a strange planet who is out to free his Mudokon brethren from the evil factory where they’ve all been forced to work. Abe isn’t a superpowered alien, either. He’s just an everyman with a weirdly shaped head. So you won’t be unleashing psionic blasts or hurling fireballs at your enemies. The game involves a lot of sneaking around and dodging obstacles that pop up at frequent and often unexpected places in the levels. You aren’t completely powerless though, since being an alien does give you one distinct ability – mind control. It’s a lot of fun to take over the minds of unsuspecting guards that aren’t protected by any telepathy-blocking equipment, and walk them over casually to their doom, often right into exploding mines or traps. If you’re feeling particularly annoyed by others of your own kind, you can give them the same treatment too.

Getting through the myriad traps and guards in a level is tough enough on its own, but Oddworld also requires you to bring along a bunch of Mudokons to freedom. You have to make sure you lead them to portals that transport them into (presumably) a land where everything is free and fair with rainbows and magic unicorns. You can choose to ignore them and just run through the game on your own, but you will get a different ending and a much tamer version of the challenge that the game offers. Finding each Mudokon trapped in any given level involves a lot of exploration and challenging navigation, and is ultimately way more satisfying.

Thankfully, leading them to their get-out-of-jail portal isn’t as tough as it used to be, now that the Mudokons aren’t as susceptible to weird AI decision making. You can now issue commands to them and tell them to hide or follow you, depending upon what the situation dictates. In addition, levels are not confined to single screen like they were in the original. You can move back and forth freely, giving the stages a larger sense of scale. Thank you, technology. Also new is the ability to aim before throwing the objects that you pick up during the level. You also have an infinite store of bottle caps that you can use to distract enemies one way or the other. Abe, as you might remember, feels like a weighty character and moving quickly between traps, jumping one second and rolling the next is still tough, although the improved control scheme makes this less of a chore than it used to be.

You also now have the ability to quicksave your progress at any point during the level, which cuts back on the time you need to retread through levels immensely. Make no mistake about it, you will die often, and even the most hardcore of gamers will find themselves reaching

for this option a few times before they reach the end. You also have frequent checkpoints along the way, so even if you don’t want to use quicksave (you will), you don’t have to restart a level from the beginning after you die.

The camera system is greatly improved now and highlights potential threats and interesting areas in the map. The old game was perhaps too skewed towards a hardcore audience, while this one gently eases the gamer into its difficult challenge. The new technology available on today’s consoles also allows the creation of some truly stellar visuals and backdrops in Abe’s story. Riding Elum, which is Abe’s trusty mount is a lot of fun, and the game incorporates a lot of entertaining setpieces around it.

Oddworld: New ‘n’ Tasty is a fantastic remake of an old school classic. The game looks amazing, and the care taken in improving the visuals for an HD generation trickle down to the minutest details in the game. The world looks more alive and imposing, the characters look and feel better, and there’s even tons of additional voice recorded for all of them. While the game does have a co-op mode, it’s actually a two player mode where each player plays in turns. Incorporating a full-scale co-op mode would have made this fantastic game even better. Regardless, if you are fond of side-scrollers and want to see for yourself what made Oddworld a hit back in the day, give this game a try.