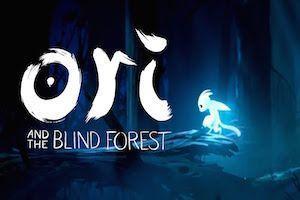 Video games might truly be the future of narrative storytelling. Until virtual reality becomes sufficiently advanced to the point where we can live inside the universe of our favorite films, games are our best bet.

As demonstrated by classics like Bioshock Infinite, playing through a fantastic story lets it resonate with you emotionally in a way that cinema simply can’t. Ori and the Blind Forest starts off with a stunning, minimalistic, wordless ten minutes which display two characters showing pure, boundless joy and connecting with each other. It’s enchanting, melancholy and utterly beautiful. Much like the Pixar animated classic Up, the first ten minutes of this game are a beautiful gut-punch.

It’s a 2D platformer with slick, precise controls and clever level design. It hides its secrets behind clever doors which can only be opened once you’ve figured out a puzzle or learnt a new skill. As Ori, the game allows you glide and move around this world in a way which feels intuitive and responsive. Our protagonist is extremely nimble, and yet the controls never make him feel like a runaway train. Ori responds to your controls, the movements of the analog sticks and goes exactly where you want him to. Later in the game, you gain the ability to double-jump. And as you would expect, it is a joy to watch Ori perform acrobatic maneuvers.

The game introduces you to new skills gradually, and then presents you with challenges that require the use of your new skills. You can shoot orbs at enemies that you want to move out of your way. There are blobs which get in the way of a surface you need to get across. Oh, and they also shoot acid into your path, because that’s what blobs do. You won’t have too many opportunities to take a leisurely stroll. You must jump, double-jump, dodge and reflect projectiles all while making sure you don’t land on something sharp.

Moving through the world of Ori and the Blind Forest is a delicate dance between caution and acrobatics. You can use the lanterns which hang overhead to give yourself a nice boost through the air, but beware of crows and fireballs. Physics is your enemy, and your friend. You will need to time your jumps and dodges perfectly if you want to evade danger. It is a thrilling ride, especially during the chase sequences.

As you would expect with a game featuring acrobatic platforming and physics – you will die, a lot. A fraction of a second could mean the difference between life and death. Getting through levels often involves a lot of dying, getting back up and hopefully avoiding the same mistakes repeatedly. Oh you didn’t magically foresee that boulders would fall out of the sky onto you? Well, now you know. Go back and evade them, Ori. It’s a tough game, but not the kind which makes you feel like the developers deliberately increased the difficulty. Completing a level involves understanding all of the different elements at play, and observing how they harmonize with each other. This is the kind of game that would have caused more than one shattered screens if it had poor controls. Luckily, the controls are fantastic, and conquering a difficult level is extremely satisfying.

Occasionally, the game offers you some stretches of tranquility. In these sections, you can glide and walk around the world, taking in the sheer beauty of your environment. The trees which linger in the background, old beings which were here much before you came into the world. There are fires and mountains which adorn some stages. There are also plenty of luminescent plants which spring out of the ground, lending the entire world a surreal, dreamlike feel. The soundtrack is filled with several moody, orchestral pieces, enhancing the action and the exploration perfectly.

There’s also a great story behind those lush visuals and pretty sounds. The plot is conveyed to you via subtitles on the screen, as a narrator who speaks in an unknown language tells the tale. The world you’re in has been dying, and your journey is part of the key to its renewal. Within the details of this story, however, hides a depth that is conveyed by subtle visual and audio cues. Creatures fluttering around in the night, some ignorant to your presence, and others extremely aware.

Ori and the Blind Forest is a rare feat – an exquisite-looking platformer which has loveable characters, a beautiful story, fantastic controls and innovative level design. It utilizes gravity, physics and the agile nature of the protagonist to create moments of joy and awe. You’ll need to be quick with your fingers, but the rewards are worth it. Ori and the Blind Forest talks about love, loss and belonging in a superb platforming package. Get it now.