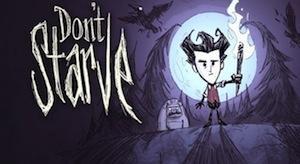 Grabbing a Free Goodie in Don’t Starve on the PS4

We have always had been fascinated with the concept of an apocalypse. Through various novels, movies, comics and games, we have explored the concept of surviving in a world where most of the world and the resources in it are gone. We have asked ourselves time and again what it would be like if we had to scrape and claw for the bare necessities to get through the day. What if food and water wasn't something that you could take for granted, but something that you might have to fight over to get? Don't Starve explores all of these questions and more in a way that is as brutal and challenging as surviving in an actual post-apocalyptic world might be.

In this game, you will die - a lot. The things that can kill you are numerous. Other than obvious problems such as hunger and extreme weather, you will have to contend with wild animals, toxic mushrooms, mutated plants and the clutches of madness. In spite of all of the things that can and will end up killing you over and over again, there is still plenty in this game that keeps you hooked. The sheer fight for survival and the thrill of escaping the embrace of death for another day is satisfying enough to keep you playing.

Don't Starve doesn't bother with too much preamble before it puts you right in the midst of its world. You are a scientist who is trying to figure out why you are here as you try to stay alive. There isn't much in the way of tutorials or hints, and the game expects you to figure stuff out on your own. This gameplay choice actually works well with the overall theme of the game. Each new object you come across in your environment will have to be carefully analyzed for potential benefits or threats. Messing with the wrong creature or eating the wrong thing will get you killed. You also have to gather vital resources such as wood, stones and other things. Every single time you are about to run out of a particular resource, the threat of something unfamiliar in the environment taking you out looms large. This unpredictability is what makes Don't Starve such an exciting game.

You will need to keep a few things stocked up at all times. You will need enough kindling to keep a fire going through the winter. You also have to keep a few weapons and tools handy for whenever you venture out into the environment to gather resources such as food and other materials. During the day, exploration is simpler, since you can see much more of the map. However, if you go too far during the night without a good source of light, the sheer fear of the environment overwhelms you and depletes your sanity. To regain some of your mental clarity, you will have to perform productive activities such as building or eat the right herbs or flowers. When your mental health slips beyond a certain threshold, the screen warps and you begin to hallucinate. During these parts of the game, you will have to contend with nightmarish creatures that have been created by your own subconscious. It's a delightful touch, and it reinforces that you are never truly safe in the world.

Don't Starve ties all of the dangers of its environments and the sheer pleasure of foraging and gathering resources into a neat package. You have the ability to put together tools from the raw materials you will find in your environment. While initially you will only be able to make very rudimentary instruments, eventually you can gain the ability to forge spears, torches, axes and other stronger, better items. As you progress further, you can eventually reach a stage where you are able to use alchemy and advanced technology to create complex instruments to aid your survival.

On the PS4, the control scheme of the game works flawlessly. The DualShock 4 controller has been utilized intelligently by the developers of the game. Holding the action button down automates the tasks of interacting and harvesting nearby items. You can peruse your inventory quickly and efficiently with the thumbsticks. Overall, it is fair to say that the controls on PS4 actually work better than the PC for Don't Starve.

The PS4 version of this game contains all of the elements that were recently added to the PC version such as a higher difficulty setting and underground caves for you to explore. On the higher difficulty setting, you are equipped with more tools from the beginning to help you deal with the advanced level of challenge. You don't have quite as much flexibility for introducing mods and tinkering with custom game elements as were present in the PC version, but that is a minor deterrent.

Don't Starve is pretty much the same experience on the PS4 as it was on the PC. While for some the sheer level of difficulty might seem masochistic, it is the very aspect of the game that makes the experience rewarding. Sometimes, you might get frustrated after you spend hours building up your arsenal and gathering items only to make a mistake that gets you killed, causing you to lose all your progress. If you are ready to accept the level of challenge that this game provides, the resulting experience will be rewarding and often, brutally humbling. Don't Starve is a deep, complex game that retains all of its charm on the PS4.