Jumping ducks are an extremely uncommon occurrence. And ducks who can perform wall runs, blast off bouncing pads and collect stars are even more uncommon.

Which brings us to Rayman - a fowl who can perform fantastic feats of acrobatics and speed as he dashes through weird and wonderful levels. The Rayman series of games has never shied away from its fantastical premise, and Rayman Legends is no different. Legends thoroughly embraces its gloriously, demented and bizarre world to create fantastic set pieces and memorable levels. As you dash across levels and platforms, sometimes tickling guards on your way to the finish line, and sometimes while 'Eye Of The 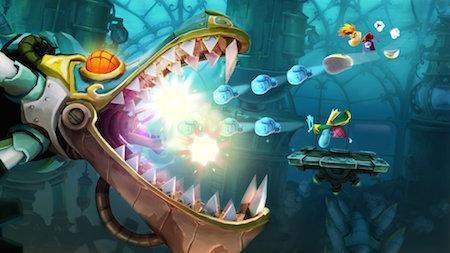 Tiger' plays in the background, you are guaranteed to have a smile on your face. Legends continuously pushes the envelope to create unconventional environments that translate into one memorable sequence after another. The amount of care and detail that has gone into crafting each of the levels is obvious, and Rayman Legends utilizes its premise brilliantly.

Speed is key to your success in this game, and Rayman is up to the task. He runs, jumps, glides and swims and swings across obstacles fluidly as you try to escape the obstacles in your path. You will narrowly avoid deadly spikes and vault across crumbling towers. What makes all of these elements even more enjoyable is the slick, fluid animation. Each movement that Rayman makes blends into his successive actions in a seamless fashion. Whether you are jumping across towers in one instant and then diving to the ground in the next, Rayman never misses a step. Immediately, you often land on a jump pad and are propelled high into the air and land on an enemy, crushing him before racing towards your next objective. The interactions with the environment are smooth and you never feel like the action on the screen is getting clunky.

The game has a nuanced difficulty curve and eases the player into it gradually, building one mechanic upon the next. The early levels are fairly easy and you will breeze through them while admiring the fantastic environments. In each level, there are one or more collectibles that you will have to keep an eye on to maximize your scores and unlock goodies. You can unlock new characters, different creatures and even additional levels from Rayman Origins. These unlockables increase the replayability of the game significantly, and encourages players to explore the levels instead of just completing them and moving on.

When Rayman Legends hits its stride, it is a thing of beauty. You are faced with a whole host of different situations that test your reflexes and on-the-spot decision making. In one level, you will have to ride a draft of wind while you navigate spikes and enemies who are out to end your joyride. In another, you will have to navigate your way through a tricky security system in a fortress that is underwater. In addition to these varied scenarios, Legends features a lot of fun boss fights that will have you fighting to stay alive as you try to figure out how to counterattack. In some levels, you are accompanied by Murfy - your trusty green fly friend. The combination of Rayman and Murfy makes for some interesting level dynamics as you will need to use him to take out some enemies you cannot reach to reach the finish line. Most games are dragged down by their underwater levels, but Legends is elevated by the ones it has. The swimming levels are a lot of fun and the fluid animations and creative obstacles make them a blast.

As is the case in all Rayman games, speed is your greatest ally. Most of the time, you will be better served if you are running through the level since a lot of the obstacles require you to have built up momentum. In some cases, you are literally faced with a ticking clock of doom which counts down the moments before your downfall. In other levels, your tail will be on fire and speed will become even more paramount. When you are traversing these levels, you will see the sheer genius of the design of the stages in Rayman Legends. Obstacles are perfectly placed and enemies pop up at just the right places so you never have to slow down. After you have finished a particular level once, the number of baddies in it increases. This means that you will have to blitz your way to the finish line in a minute without getting hit to free the teensies which are trapped in that level. When you see a ghost Rayman in some levels who stalks you like a shadow, mimicking your movements as you run to the finish, you will appreciate the care that has gone into the making of this game.

Of Rayman Legends is uniformly fantastic. Most levels contain a groovy set of beats and tunes that will have you smiling all the way to the finish line. In some levels, you are able to influence the soundtrack with your movements. Whenever you perform a movement on screen, the music changes slightly to acknowledge what you did. Stringing together a set of diverse movements to create a background score of your own is a lot of fun.

While Legends is primarily intended to be a single-player experience, it also offers a co-op mode for players who want to explore the world with their friends. While unskilled players can often cause some delays in your finish time, it's very interesting to see how you can use physics to propel your friends' characters to reach a hidden destination and collect some goodies. There's also a head-to-head multiplayer option available, if you choose to play it. This mode, in the humorous spirit of the Rayman series, is dubbed 'Kung Foot'. You compete with up to three other players in a manic game of soccer. The objective is simple - throw the ball up in the air and either slam it into an opposing goal, or skip the ball entirely and smack your opponents' characters instead. It is a great mini game and with the right players, it offers hours of hilarious action.

Rayman Legends is just about a perfect platforming experience. The visuals are amazing, the animations are fluid and the soundtrack is stellar. The PS4 version of the game looks nearly identical to its counterparts on other platforms, and it includes some minor caveats like the ability to take screenshots of certain moments in the game. The PS4 version doesn't bring anything majorly new to the table, but if you haven't played this game before, it is an absolute must-have.