Velocity 2X is one of the most kinetic games ever made. Every single element of the game blends into every other element to create a seamless blend designed to give you the feeling of speed.

You’re constantly bounding through passages, obstacles, jumping and shooting as you destroy bad guys and objects in the environment alike.  It takes inspiration from the greats in the 2D platformer genre – Mario, Metroid and variety of other side scrolling shooters. And where most games fail to meld the different elements of their gameplay in a cohesive fashion, Velocity shines by creating a dynamic, polished and refined experience.

The game puts you in the shoes of Kai, who immediately gets captured. During her captivity, she is tortured and experimented upon. She undergoes various procedures whereby she is fitted with a series of cybernetic components, turning her into a legit badass. There’s not a ton of depth to the story here, but Kai is a capable and likeable 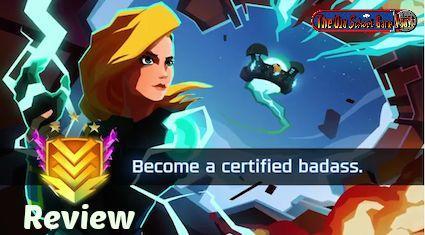 protagonist. She’s funny, easy to root for, and her story has a nice emotional arc. Once you’re out of captivity, the game takes you through a wide variety of fantastic locations. You will run your way through teleporting ships, exploding corridors, portals and many other places, all with a trusty arm cannon to take care of anything that might stand in your way. You can see the nod to Samus here, and it’s a welcome sight for fans of the Metroid games.

The artwork and graphic design in Velocity is uniformly fantastic. The different futuristic environments you’ll journey through are all fantastically lit and the geometry of each map makes running through them a lot of fun. The developers have used cel-shading cleverly, and blended it with a few neat tricks to make the look of the game distinct and memorable. The environments are 2D, but are interspersed with various elements that give you a sense of depth. The levels are designed specifically to keep you flowing through obstacles without having to slow down.

Velocity is more than just a pretty looking game, however. The tutorial levels are a master class in introducing players to the different gameplay mechanics in an original and intuitive way. There’s a lot to learn, and each of the initial levels introduce you to the separate kinds of action you’ll encounter later in the game. Subsequent levels use combinations of skills used earlier while subtly introducing you to new mechanics. In a game like Velocity, this is critical because the later levels will have you juggling between different gameplay styles where you’ll have to balance all of the mechanics you’ve learned earlier perfectly. The rise in difficulty is gradual, and you won’t find yourself completely unprepared for something after you’ve finished a level. Even the early levels aren’t the easiest to get perfect scores for, and this will give players some extra motivation to come back and do things better the second time around. The gradual rise in difficulty only serves as a weakness during the climax. The constant buildup might have players expecting an epic finale, but the ending doesn’t offer too much resolution. It’s just a segue back into the story. The ending is the only real thing you can point to as a flaw in Velocity 2X.

When the game starts off, you’ll learn the basic movements that you need to get around a ship. Once you’ve done this, the game introduces you to its teleportation mechanic, which requires you to have lightning reflexes on your flicking finger. It’s a fantastic addition to the way you move through the levels. Once you’re able to teleport, walls and boundaries feel like they’re inconsequential. You can forge your own path through any level based on how skilled you are. It isn’t the easiest thing to master, however. You 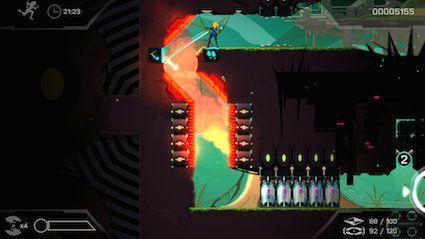 could time your jumps and warps wrong and end up killing yourself. Fortunately, dying isn’t too much of a hindrance in this game, since you’ll usually respawn almost immediately. Once you’ve been through the movement drills a few times, you’ll start to gain the ability to make your progression through the level more fluid. Familiarizing yourself with the layout of any given level also helps a lot. If you know what lies on the other side of the wall, you can make decisions in advance.

The aiming system is thankfully quite accommodating in this respect, since you don’t need to target your jumps too perfectly to make them. Later during the game, you’ll come across levels when Kai has to move around on foot and deal with more treacherous environments. To keep the environment from becoming a perpetual minefield where players teleport into their doom again and again, the game places a limit on the distance you can teleport to at any given time. You’re also given the ability to dash through short distances. When you combine the dashing, jumping and teleporting mechanics, what you get is a symphony of movement and destruction, and it is incredibly fun.

Velocity 2X tests the skill of its players in increasingly creative ways by introducing environmental hazards and enemies in locations that will require you to combine all of the knowledge you have gained in earlier levels. Later levels feature warp portals that can instantly transport you back and forth to different areas of a map. These portals are often critical pieces in puzzles that require you to warp to both ends of the map to solve them. These puzzles are brilliantly designed and the warp portals eliminate the tedium that is usually involved in backtracking missions.

Velocity drives you forward constantly, and asks you to make choices that evolve organically out of your forward momentum. For example, Kai cannot use her arm cannon when she’s dashing in the levels where she’s on foot. Here, you have to make do with a rifle that shoots left or right in straight lines. As the player, you have to choose between the safety of the arm cannon and the relative danger of the rifle, essentially making it a choice between speed and caution. In the ship levels, you can literally boost the entire map upward, which might crush you if you’re stranded on a ledge as the map shifts. What makes Velocity 2X interesting isn’t that its mechanics are completely unique, but the fact that they’re complemented with a brilliantly fluid movement system, and the constant ticking clock.

Velocity 2X is a game that pushes forward relentlessly, and doesn’t even allow death to slow down the pace of the game. The different gameplay types blend into each other naturally. One moment you might be shooting down ships, and in the next, teleporting through walls and firing at bad guys. The animations are slick and the framerate is consistent throughout. Even if you’re not a fan of the genre, Velocity 2X is a game that is guaranteed to amaze you.