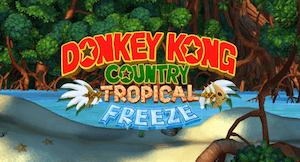 Donkey Kong is one of the most iconic franchises in the history of gaming. Anyone who grew up with the old generation of 8-bit consoles has tons of memories of trying to rescue a princess while trying to stay alive as a gigantic gorilla rained all kinds of obstacles around them.

The original Donkey Kong is an arcade staple to this very day, among a small niche of fans. So when Donkey Kong Country: Tropical Freeze was 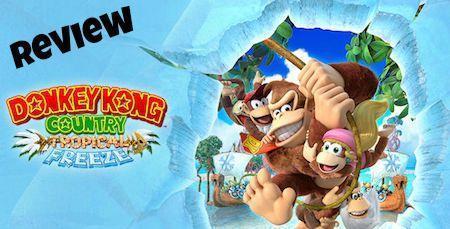 announced for the WiiU, expectations were high. Unfortunately, the game does not hold up to the high standard set by Nintendo's previous efforts in the franchise. While the game introduces two new playable characters - Cranky Kong and Dixie Kong, the levels themselves offer little in the way of innovation or challenge. While it does have its moments, Tropical Freeze remains a singularly unexciting platformer.

One of the main shortcomings of Tropical Freeze is that it doesn't take any chances. It simply sticks to the established formula of the old-school platforming titles and adds a few bells and whistles. When you consider that such fantastic games as Rayman Legends and Super Mario 3D World are breaking now ground on the WiiU, this game looks like a cheap effort. While it doesn't have too many bad levels, it doesn't have any great ones.

Pretty much everything you do in the game follows a single, standard pattern. You leap over a platform, and you hit someone in the head. Sometimes, the game adds a few vines and zip lines, but it's still the same old formulaic gameplay. The levels change and some jumps increase in complexity, but you never really feel like you're doing anything different. The level design lacks imagination and fails to utilize the possibilities that the premise of Donkey Kong offers.

The game also feels a bit uneven in most places. Levels almost never have a flow or rhythm to them, and at a lot of junctures, you'll find yourself looking at obstacles or enemies that are placed inside levels just for the sake of it. Some levels start off great, and you will be jumping across treacherous obstacles, only to run into a stone wall that collapses intermittently. These hazards would feel natural if they tied in to the overall theme or pace of the level, but this is not the case in Tropical Freeze.

The new playable characters each have their own specific set of abilities, and they offer a nice change to the monotony. Dixie Kong can make you float and jump farther. Crank Kong allows you to bounce higher and scale obstacles that would otherwise be out of reach. Diddy Kong has a jetpack that lets you zoom around the level. Unfortunately, the game doesn't make any good use of these abilities. With additional attention to level design, these separate abilities could've allowed for some truly intense platforming action. The unlockable levels are slightly better, and have a few good puzzles and jumping sections.

Occasionally, you will find that Tropical Freeze does something truly frustrating. In some levels, you might navigate a difficult section, escaping by the skin of your teeth, and jump only to land on an enemy that was not visible on camera. In other sections, you might be sliding down a zip line at top speed and miss the barely visible cues for jumps and fall to your death. In Donkey Kong Country Returns, the developers gave players a great mechanism where they showed you what path you should have taken during a level. There is no such help in Tropical Freeze and you will have to figure out most sections through trial and error and you will undoubtedly end up dying a lot of times in the process. Thankfully, you do manage to gather a lot of extra lives along the way, and you can always purchase extra ones by using coins.

The game fares slightly better in its vehicle sections. These levels feature some of the fun elements that will remind you of previous Donkey Kong games. They are also a nice 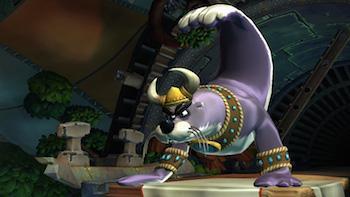 break from the repetitive levels that otherwise make up the campaign. You will guide Rambi the Rhino through an increasingly complex sections of blocks and enemies, and zip through the air on rocket powered barrels, trying to stay out of harm's way. These levels are fun, fast-paced and offer an enjoyable level of challenge. Your reflexes will have to be sharp if you want to beat these levels.

The game also features a few interesting boss battles. You will come up against a wide variety of creatures ranging from giant owls to pyromaniac monkey trios. Each of them has a specific attack pattern and you will have to figure it out before you can defeat them. Boss battles require some twitch gameplay, and you will enjoy picking up bombs and hurling them right back at the monkeys that threw them. A lot of these boss battles play out over multiple stages, and you might find yourself cursing at the screen because you didn't get to a checkpoint and had to restart the battle. Beating these bosses is easier if you have a friend play co-op with you, since any additional help you can get is welcome. Remember to make sure that you have stocked up on extra lives before the boss battle begins.

If most of the game had the inventiveness of the vehicle sections and boss battles, Donkey Kong Country: Tropical Freeze would have been a fun platformer. However, this is sadly not the case. Even though the HD visuals look great, once the novelty wears off, you wish the developers had spent more time designing the levels and paying attention to the gameplay. While the art style largely stays true to the roots of the franchise, it mostly feels uninspired. In summation, Tropical Freeze is an average platformer that features some bright spots, but they are few and far between.