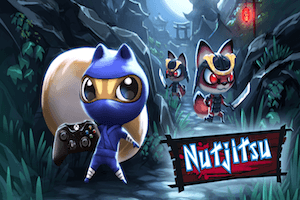 Have you ever looked at Scrat from the Ice Age movies and wondered what it would be like to run around, scrounging for nuts, all while trying to save your hide from enemies who aren’t particularly fond of you?

If you have, Nutjitsu will allow you to step into the role of a squirrel who has to do pretty much the same thing.

This is like Pac-Man, if Pac-Man was a squirrel, and instead of gems or dots, you had to collect nuts, and instead of other Pac-Man-esque creatures trying to eat you, there were foxes. Yes, Nutjitsu isn’t the most creatively named game out there.

The level designs aren’t very diverse. Each level consists of a map that fits into a single screen. This map is filled with pathways that lead up, down, left and right. Patrolling these pathways are foxes, and you have to escape their glare long enough to collect all the nuts present on the map. You need to understand the movement patterns of the different foxes and time your movements accordingly to avoid getting eaten. If you take too long, the number of foxes in the stage increases. And as you can guess, when this happens, life as a squirrel isn’t particularly fun.

At the start of each level, you are given a certain objective which you can shuffle if you don’t feel like playing a certain way. For example, you can either choose to collect a certain number of scrolls instead of acorns, or just occupy a certain position in the map for a specific number of seconds. You can also choose to play the Survival mode, where you have to last as long as you can without running into an enemy.

The foxes don’t have too much variety either. There are three types of enemy foxes that you go up against. One of them is the plain vanilla variety which just walks around and looks mean. The second kind of fox leaves a poison trail behind in its wake, and if you happen to get caught in the poisonous goo, you will lose movement speed. The poison trail doesn’t last forever though, so you can bide your time and then move to where you want to once it’s gone away. The third kind of fox offers an interesting challenge, because it can make short dashes, and it brandishes a spear. On account of this ability, this enemy can close the distance between itself and you rather quickly, so you have to be cautious around it. Unfortunately, the placement of these different enemies on maps often seems random, since they never team up with each other in any meaningful way. Each fox seems to be doing its own thing and doesn’t have much to do with its kin that roam the map. Most of the challenge in the game comes not from the specific combination of enemies in a particular map, but from their sheer number. Once more enemies start popping up, the map begins to feel small rather quickly, and escape routes are few and far between.

You begin with a limited number of stages to choose from, and since you have to earn experience points and ranks to unlock the higher stages, you will be replaying them quite often. You can also exchange experience points for extra abilities, more inventory slots and different types of acorns for you to collect. The game seems to be rather strict with the unlocking of its maps, and you might find playing the same arenas over and over loses its charm quickly. Where Pac-Man, a game that undeniably served as inspiration for Nutjitsu, managed to make do with fewer maps because each of them was precisely designed, distinct, and had its own rhythm you needed to find, Nutjitsu is unable to. Most of the maps in this game seems like randomly generated sets of pathways and none of them really offers a distinctly different challenge than any of its counterparts. The music gets repetitive quickly too, since it’s the same score droning on throughout the game.

Nutjitsu offers you a series of difficulty levels to choose from, and choosing a higher difficulty earns you more experience points. You can also use items such as smoke bombs to help you through some tough situations, but items are expensive and you might have to do some grinding to earn enough acorns to buy these. Common logic would say that if items are expensive, you use them less often. But Nutjitsu forces you into a corner in some stages by throwing such a large number of enemies at you that you are forced to use items to clear the stages. In a curious gameplay choice, you even get rewards if you use expensive items a certain number of times. Grinding your way through a game filled with repetitive levels doesn’t exactly sound like a fun time, and it isn’t.

Nutjitsu has a few things going for it – the stages look great visually, and the controls are smooth. However, sheer lack of variety kills most of the potential that it could’ve had. The items are prohibitively priced, and some situations will require the usage of multiple items to get through. It’s tough to see a game that could’ve been such a fun adventure turn out to be a repetitive, often dull game, but such is the case with Nutjitsu.

Game Trailer:
Nutjitsu Review – Xbox One
The indie developers are slowing making their presence felt on the Xbox One. Nutjitsu is one of the first indie games to make a splash, find out how it scores in this review By The Old School Game Vault.
Written by: Brandon Perton
Nutjitsu
4.5 / 10 stars
Facebook Twitter LinkedIn Pinterest Reddit
Tags:
Xbox One Review
(A Quarter Century Ago) Video Games Taught Me.......
Wolfenstein: New World Order Game Review