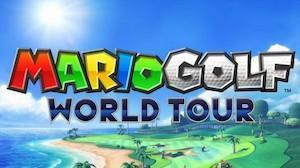 Has there ever been a character in games or in real life who is more prolific than Mario? This short Italian man with an adorable moustache has done plumbing, go-kart racing, played basketball, tennis, and even competed at the Olympic Games.

That’s a lot of hats to wear for one guy. And not to forget, he also plays golf. And in the latest Mario Golf game, suitably titled Mario Golf: World Tour, he’s testing his skills across courses all over the globe. World Tour is a fun game that, while initially appearing a bit haphazard, subtly demonstrates all that is good about the game of golf, and the world of Nintendo. It’s an endearing and enjoyable experience that welcomes players of all skill levels.

On the one hand, this is a serious game of golf, which requires a fair amount of skill to master, and on the other hand, there’s the wacked-out psychedelic mushroom color madness of the most popular Nintendo games. These two aspects of World Tour often seem to work against each other. You initially visit the Castle Club, where your Wii Avatar can roam around, chill out, have a look at the gym, do some shopping, and socialize with different Nintendo characters. The design of the castle will immediately remind you that you’re in a Nintendo game, in case you forget. Here, you also have access to a variety of practice courses, tournaments and different challenge modes that familiarize you with the basic mechanics of the gameplay.

At the Castle Club, you also find three of the game’s more normal looking courses, and in order to unlock each one, you have to win a tournament that is hosted at the previous course. These courses are alright if you’re in a normal golf game, but this one isn’t. And therefore, it’s unlikely that you will be playing the 18-hole tournaments featured on these courses any time after you play through them the first time. After you’re done with the offerings of the Castle Club, you are transported to an entirely different universe of sorts, with different rules of its own.

The World Tour mode is the major meat of the gameplay in this game. When you begin the tour, you are faced with a number of challenges that will make sure you understand the specific mechanic that the game wants you to grasp – elevation, wind variance and others. While most of the Castle Club courses require the use of actual player skill to progress, some of the courses you unlock later in the game can be won through the blatant use of powerups and other items. After you’ve been taught the appreciation of the 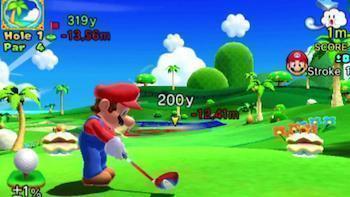 finer elements of golf play, this dynamic seems out of place. But eventually, you will get used to handling the various power-ups and special items at your disposal, most of which have interesting names like Bob-ombs and Bullet Bills. The courses themselves are a lot of fun and have very unique designs.

There’s a lot of subtlety in the way the controls are handled in World Tour, and you will come to appreciate the finer details once you start competing in some of the more difficult stages. You have to control how much spin you want to put on the ball, how far you want it travel, play around with the fade and draw and also make sure you impart the perfect amount of power to each of your shots. A little mistake could mean the difference between a shot that puts you within striking distance of the hole, and one that sees your ball slam into a hurdle.

As expected, there are a lot of special appearances by Nintendo characters that have become fan favorites. Bowser, Donkey Kong, Toad, Yoshi and others make their appearances here, supported of course by Mario and Luigi. Watching them compete against each other as they mouth their characteristic dialogues is a lot of fun.

There’s a lot of variety in the gameplay itself too. At any time, you can choose to compete in challenges, 1 v 1 battles, or a tournament that catches your fancy. Some of these are purely skill based, while others require the strategic use of power-ups and special items. You can also compete against some of the AI characters to unlock their playable versions. Each tournament or challenge that you win will grant you some coins that you can spend to purchase cosmetic or functional gear. Different clubs and balls tweak the way your shots work in the game, and playing around with these, while also adorning your avatar in the choicest gear, makes playing through the game a lot more fun. Unfortunately, it isn’t immediately apparent how to make the switch back and forth between the gameplay and shopping for items.

Mario Golf: World Tour is a solid and enjoyable experience that blends the beauty of a golf game with the wackiness of the Nintendo world admirably. The map designs are fun, and watching your favorite characters struggling to beat the par score will often bring a goofy grin to your face. While the menu and navigation isn’t the smoothest, World Tour features enough fun, laugh-out-loud hilarious moments and rewarding gameplay that its minor flaws don’t hold it back.