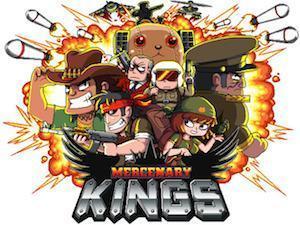 They say there are no ideas that are totally original. Everything that can be said, has been said, in one form or another. But while people scoff at games that may seem derivative or ‘inspired’, a game that takes its inspiration from a fun place and adds in its own unique touch to the mixture can be a lot of fun. And this is the case with Mercenary Kings. A 2D shooter that will immediately

remind you of classics such as Metal Slug, Mercenary Kings takes the original formula and adds in a lot of blood and violence and even throws in some RPG elements like crafting. While at a glance this might seem like an odd mixture, if you give Mercenary Kings a chance, it will impress you.

You are given the option to play as one of two characters – King and Empress. Both of these mercenaries have been killed recently in an epic battle against CLAW, a nefarious military outfit. Thanks to the wonders of modern technology though, both King and Empress are alive and well. However, reanimating dead people is a precious skill, and in the wrong hands, it could spell disaster. This kind of disaster is CLAW’s exact M.O. and they are looking to get their hands on this technology so they can wreak all kinds of havoc on humanity. While this might sound like a cartoonish plot, Mercenary Kings delves into some dark areas at times, although the cartoonish art style and upbeat music makes the action seem less serious.

Missions involve completing a set of objectives handed down to you by your superiors, and they take place in chaotic stages. You have to sabotage, neutralize, rendezvous, infiltrate or gather depending upon the specific objective of the mission. But make no mistake, in all of these mission types, you will be shooting a lot of enemies till you get what you want. There are over a 100 stages for you to shoot things in, and these are arranged by difficulty levels. To complete the main story, you only need to get through around 10 levels, but most of the replayability in Mercenary Kings comes from unlocking, and then beating the different levels in different tiers. Unfortunately, there isn’t much variety in these levels. Most of them just look like skinned versions of each other with a few hallways and corridors interchanged here and there.

Each mission is timed, and might allow you anywhere from 15 to 30 minutes of mayhem. Once you get the hang of things, you won’t really need to exhaust your timer much. The interesting part of combat is the way you have to manage your inventory. Since you can only carry a certain number of items into any given level, you have to pick and choose carefully. You need to carry a lot of demolition equipment along too, so a lot of your space is taken up by bombs and C4 supplies. The rest of the space can be filled with guns and ammunition. But don’t worry, if you’re skilled enough, this won’t be a problem. Once you’ve got an idea of how the layout of a certain level is, you can shield yourself from damage for significant stretches. You can avoid bullets by simply ducking, at least in the earlier levels. You might occasionally run into a miniboss or a boss, but even these enemies are easy to take down once you understand their specific attack patterns.

When you first start playing Mercenary Kings, it might seem that there is a lot of information to keep track of. But once you’ve been through a few levels, you will eventually understand how to use the different resources available at your disposal. The game does away with any tutorials, which is nice because it allows you to get down and dirty straight away. You do need to start using the entire arsenal of your tools eventually, because otherwise you might find the going tough in later stages. You have the option to craft your own guns, and this is one element that beginners might overlook initially. Enemies drop different gun parts, and you can piece these together to create powerful weapons. Creating a powerful weapon after meticulously gathering all of the supplies needed for it is tremendously satisfying, as is blasting through a level that you were sneaking around previously because you didn’t have a good weapon.

The multiplayer mode has some interesting options, but it is unfortunately plagued by some annoyances. If you’re matched up online with someone who is a newbie, you are in for a frustrating time. They might accidentally kill someone you’re supposed to rescue, or hog all the loot for themselves while you’re doing most of the hard work. However, when you are matched up with someone who knows the game as well as you do, co-operating through a level together is a lot of fun. The game is also plagued by occasional frame rate drops and outright lags. These glitches are inexplicable for a game that features primarily 2D graphics. The game takes ridiculously long to load as well, and this is another thing that might leave you scratching your head in bewilderment.

Mercenary Kings is a tribute to the old-school side scrolling shooters. The art style is deliciously retro, and the music complements the graphics perfectly. When the game gets into gear, it is tremendously fun to play. But unfortunately, the experience is often marred by a variety of minor issues. If you’re looking for some old school shooting action on your PS4, give Mercenary Kings a run.