Sniper Elite III has one card to play, and it’s a damn good card. However, everything around that one thing feels like going through the motions. When you’re crouching, steadying your shot, controlling your breath and sending some lead flying through the air from hundreds

of meters away towards an unsuspecting foe, Sniper Elite III is fun. But when you’re getting to the perfect position, crouching and dodging and trying not to attract any enemy attention, it is merely average. Because there is such a great payoff, you might still keep yourself going through the drudges, but it might 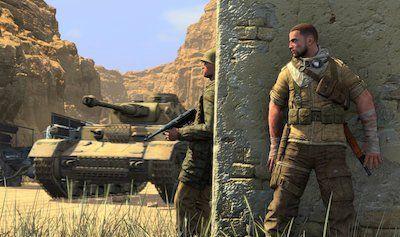 test your patience. In addition, there are only a few opportunities where you actually get to blow someone’s brains out in slow motion. In most missions, you’re better off keeping your actions on the down low, picking off enemies quietly and moving on before they know what happened.

Sniper Elite III has more freedom in the way its levels are structured compared to previous entries in the series. There are some occasions where it allows you to land kill shots from up to 300 meters. There are strategic vantage points available across all of the eight maps that the game takes place in, and getting to these is often a struggle, as it should be. You could chose to rush in Rambo-like, but you can only take a couple of shots before you’re sleeping with the fishes. You have to tiptoe around enemy patrols and move silently through cover before you can reach your perfect sniping location. This is not to say that the game is GTA with snipers. There is a little bit of freedom that you’re given, but the objectives that pop up in your path always guide you in a certain direction. The game keeps reminding you of little quests along the way, and completing them in order leads you down a specific path.

You can go through the game without racking up a huge body count, but what’s the point of fighting your way to a great vantage point if you can’t make it worth your while? Once you make your way to a sniper nest, you can look around and search for targets. Before firing the shot, you have the option to steady your breathing pattern so that you achieve more accuracy. When you do this, an additional red dot appears in your crosshairs, indicating the exact location where your round is going to connect. Once you’ve got everything in order and fired your shot, the camera follows your bullet as it dips through the air and slams into your target. You have to be careful though, since firing a high-caliber rifle like your own creates a huge din that might be noticed by nearby enemies.

The best part of Sniper Elite III is watching the kill shots. The camera slows down the action and shows your bullet piercing through flesh and bone as it obliterates your targets. Eyes, lungs and other limbs are mangled and decimated in an extremely gory fashion. If you’re squeamish, you have the option to turn these animations off, but that takes away most of the fun of the game. This one is not for the faint hearted.

Unfortunately, much too often, the game keeps you from the meat of its gameplay by indulging you in extended stealth sections. You’re put into the midst of an area that is teeming with enemy soldiers, and any unexpected noise that you make could bring them swarming to your position. You have to sneak around and eliminate enemies with your silenced pistol or your knife. During situations where you have to fire a shot, you can always immediately move to another position after firing your shot so you don’t get detected. In some stages, you can use noise that is present in your surroundings, such as generators or the noise of planes to mask the firing of your rifle.

Are good-looking and have a distinct feel to them, which is a welcome change from the dull scenery that permeated previous games in the series. It isn’t the most advanced graphical engine of all time, but it’s a big step up for the Sniper Elite series. You have plenty of lush greenery and mountains to traverse. The story itself is pretty standard for a WWII shooter and doesn’t stand out too much. In places, the game takes its story too seriously, leading to some unintentionally hilarious dialogues and character interactions.

You can play the game in co-op mode with a friend, which is a lot of fun. You can flank enemies and set up kill shots much better if you have a friend who can help you with positioning and diversion. You can also play a mode called Overwatch in co-op mode. Overwatch is basically where the game abandons all pretense and puts you against wave after wave of enemies that you have to snipe before they manage to deplete your health and ammunition. Multiplayer is sort of weird, since this is a sniper game and there are plenty of moments where you camp and kill someone who isn’t looking or have the same happen to you. There are a few extra modes such as No Cross and Distance King, but they aren’t exactly noteworthy beyond a couple of rounds.

Sniper Elite III has a core gameplay idea that is solid, but it tiptoes around that idea too often. Instead of putting you right in the middle of the action, it makes you spend too much time tiptoeing around in pointless missions. The online multiplayer is buggy, and even when you do manage to connect, there isn’t much variety in the game modes. However, when Sniper Elite III puts you behind the crosshairs of a sniper rifle, it shines. If you want to channel your inner Vasily Zaytsev, you might want to give this game a crack.