Tales from the Borderlands - Review

When Telltale Games first started creating episodic games, there was a lot of skepticism in the gaming community. Over the years, they’ve proven that creating interesting and thought provoking gaming adventures out of whatever source material they touch comes naturally to them.

The Walking Dead series of games is a testament to the power of their narrative, episodic gaming. And hot on the heels of that series comes another offering that spins off from one of the most innovative FPS 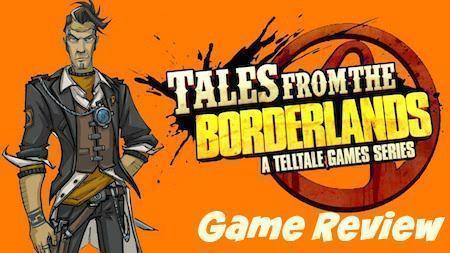 franchises of our time – Borderlands. But you might be thinking “Borderlands isn’t a graphic novel. Where’s the source material?” Well, to answer it simply – fan fiction.

With Tales from The Borderlands: Episode 1 – Zer0 Sum, Telltale Games have once again demonstrated the power of well-written fan fiction. They’ve managed to capture the Borderlands spirit perfectly, and created a rollicking adventure that plays to their strengths while remaining true to the source material. The plot moves along rapidly, and you won’t feel like conversations are plodding along at any point of the game. You’ll feel the tension that hangs over the heads of the characters.

That being said, fundamentally, the Borderlands games have always been about plundering for different types of ammo, and then going and blowing stuff up with it. Zer0 Sum gives you plenty of opportunities to do both. There are lots of action scenes to play through, and loads of killing to accomplish. You won’t be running through strange lands on your own here, but you will be operating mounted guns and testing your equipment occasionally. You’ll duck and weave to avoid obstacles, pummel Psychos and send pesky guards to the afterlife. At any given point of the game, you could be performing daring jumps from moving vehicles, trying to hide from a hail of bullets, or introducing enemy skulls to hard objects. There’s no time to sit and admire the scenery here. The action is fast, frantic, and relentless.

If you’ve played one of Telltale’s games before, you’ll know that you are presented with dialogue choices, and you only have a limited amount of time to choose one of them. During different points of the game, you’ll play as Rhys (who is an employee of Hyperion, a company which is universally hated) or Fiona (a clever con artist who has plenty of interesting moral choices to make). The game begins with both of them being questioned for a heist that has gone wrong. From there, the story immediately pushes the pedal to the metal. Without revealing too much about the story, expect to make difficult choices about which of your comrades to save, and which ones to sacrifice. Both Rhys and Fiona offer different viewpoints, and both of their ethical quandaries are interesting to explore given that they are liars by profession.

Unfortunately, the rest of the characters in this episode don’t quite live up to the same narrative standard. The villain in particular seems a little innocuous, at least during this part of the story. Perhaps we’ll see him come into his own in future episodes. Fiona has a sister, Sasha, who is unevenly written. Vaughn, who is another of your companions, feels like he’s trying too hard to inject some humor into the proceedings. Bossanova, one of the warlords you’ll meet on your journey, is quite a memorable character. Unfortunately, he plays a very small role in the grand scheme of things.

When it comes to equipment, there’s a lot to play with here. Since Rhys works for Hyperion, you get access to cool gadgets like the Echo Eye, which is an implant that (conveniently) allows you to get more information about your environment. You can also put together a robot that will do some of your fighting for you. Additional goodies include various cybernetic implants which enhance your ability to control electronic systems or shoot people.

The art style is fantastic and stays consistent to Gearbox’s own series of Borderlands games. The voice acting lives up to the stellar standard set by the visuals. There’s a dry sense of humor that pervades the entire proceedings, even when things are getting grim. You’ll have several laugh-out-loud moments when you least expect them. The characters are snarky, witty and genuine in their interactions with each other. The Borderlands series has always had its own quirky sense of humor, and Telltale Games has done a fine job of imbuing the story with it. The musical score is equally fantastic, with pulse-pounding tracks and foot-tapping numbers in equal measure. It’s unmistakably a Borderlands game.

Telltale Games have created a Borderlands adventure that is so true to the aesthetic of the series, you’d think they have been doing it forever. They’ve created a fantastic story within this universe that brings in the good things from both franchises. If you’re a Borderlands fan, you’ll love this game. If you’ve never heard of Borderlands or Telltale Games before, you’ll still enjoy this game immensely. It’s a complex, funny and thoroughly entertaining adventure.