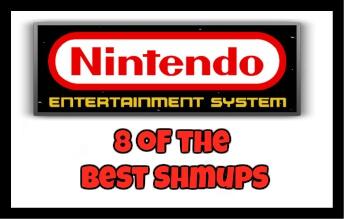 Do you remember any of your favorite childhood dreams? We do. At least, if you’re anything like us, you dreamed about being a badass fighter pilot.

How cool would it be to rocket past enemy lines, blasting baddies left and right with machine turrets to liberate entire planets? Well, the NES gave this experience to a whole generation of gamers through some of the most nostalgic shmups ever made.

Today, we’re going to look at 10 NES shoot em up games that every retro gamer needs to try. Some of these are fantastic arcade ports, like Xevious, but many of them are NES originals. Now, load up, take aim, and reminisce about theses excellent NES shooters. 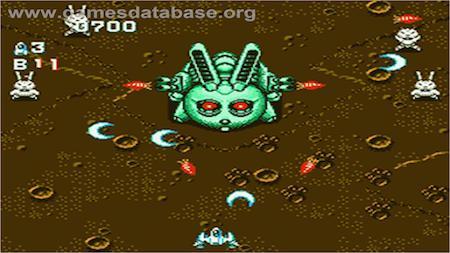 Gun Nac is one of the wackiest and most over-the-top shooters you will ever play. The enemies in this game are, to say the least, unusual.

You’ll battle killer rabbits, trees, sentient briefcases, and even deadly umbrellas. Naturally, the game also includes some truly outrageous boss battles, such as a kitten who is trying to hit you with loose change. In other words, there’s enough humor and variety to keep you interested, even through the scores of times you will die hilariously.

Despite the unpredictable insanity unfolding onscreen, the game features a tight control scheme that won’t cause frustration. For additional details, read our full review of Gun Nac. 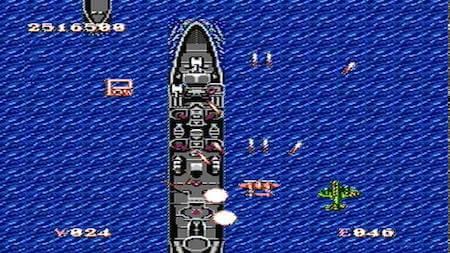 In contrast to modern war games, 1943 is not what you’d call realistic. Honestly, though, it’s much better off because of it.

Players control a lone fighter pilot facing off against several fleets of Japanese airborne forces. Your allies are sparse: a few support planes that occasionally provide cover fire/thin out the enemy herd.

So, you’ll have to master your own piloting skills to get through 24 stages of challenging combat. In several stages, your screen is filled with enemy planes and ships, all firing their 8-bit dots at you. Duck, dive, dodge, and blast your way through to send your enemies to the afterlife. 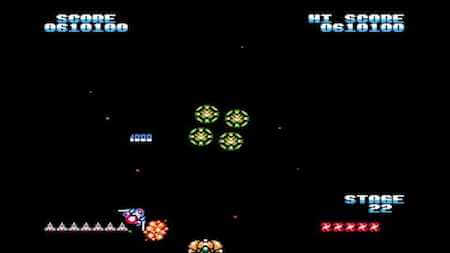 In the 80s, the overwhelming majority of shooters were side-scrolling or vertical-scrolling clones of Galaga and Space Invaders. Gyruss, however, stands uniquely distinct from these clones as one of the earliest front-view shooters.

As in Space Harrier, players scroll forward into the action. A one-point perspective gives the illusion of depth; oncoming enemies grow larger and retreating enemies shrink into the distance

Interestingly, the gameplay is like playing Clay Shooting while driving through an aqueduct. You move along an invisible semicircle, shooting the enemies before they’re too far away to see.

Collect power-ups to thin the hordes and gain additional firepower. More importantly, you must hone your reflexes to survive the challenging boss battles and endure all 39 stages. 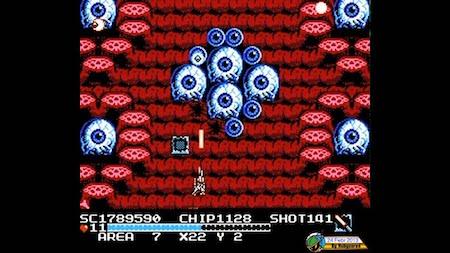 The Guardian Legend is like a fun mix of Gradius and the Zelda games. It’s half space shooter and half exploration-based adventure.

And that makes sense because it’s made by Compile. Besides creating several hit shmups like Zanac and Aleste, Compile also made the cult classic Zelda clone, Golvellius.

The shooter sections of The Guardian Legend are a good length and sufficiently challenging. In other words, you’ll definitely die a lot as you’re getting the hang of the controls.

Plus, you’ll find lots of cool power-ups in the adventure sections that you can bring with you into your air battles. The music is a real highlight of this game, with some fantastic tracks and punchy sound effects. You’ll also face some highly enjoyable boss/miniboss battles. 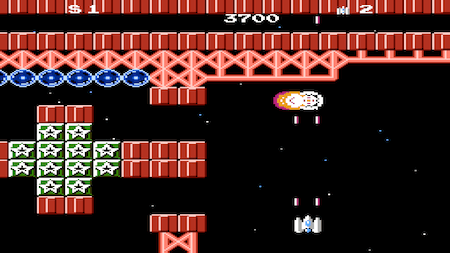 Star Soldier came out in June of 1986 and was immediately a massive hit in Japan. So, although Hudson’s shooter didn’t have quite the same impact on western shores, it was very influential to the shmup genre.

Furthermore, it was quite innovative. For example, certain objects in Star Soldier can block projectiles. Players can take cover behind these objects to survive a volley, a notably rare feature in shooters.

However, you can’t fire through these objects, either. You must strategically risk exposure by leaving your cover in order to destroy the enemies.

As for the basic features, Star Soldier has good controls, lots of fun power-ups, and multiple weapons to try. Overall, there’s plenty to like here, even if you’ve played dozens of comparable 8-bit shooters. 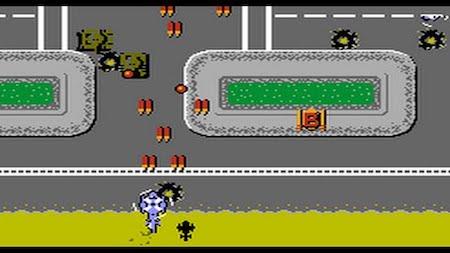 While it doesn’t innovate a lot, Twin Cobra is a solid overhead shooter. Namely, it makes up for its lack of complexity/originality with perfect pacing.

You’re overwhelmingly outnumbered throughout the game, with only brief periods of rest. Because of this, it’s unceasingly satisfying to out-zoom your enemies and explode everything onscreen one by one.

To add to the challenge, the play area extends past the right and left edges of the screen. These margins and the enemies hiding in them, remain unseen unless you fly toward them.

You have two buttons: one for your primary guns and one for your special weapon. There’s also a huge bomb you can drop to destroy everything in sight.

While it’s less graphically advanced than, say, Gradius or Life Force, it offers enough of a challenge to monopolize a lazy afternoon. This is one of our favorites, especially considering its low price tag. 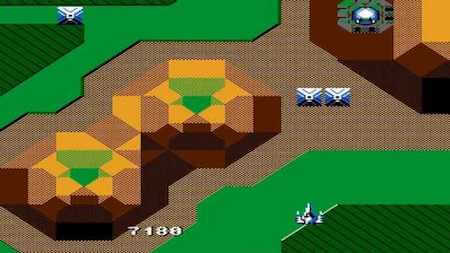 In Alpha Mission, you collect energy bars to fuel your weapons. A weapon select screen lets players choose from a varied arsenal of weapons.

In a cruel twist, there are also negative power ups that, well, ruin your day and make you throw your controller. You could collect a ‘C’ power-up, for example, which totally drains your energy, power gauge, and every other meter you have built up. Alternatively, you could be lucky enough to find a power-up that warps you ahead half a stage.

This unpredictability makes for a unique shmup experience, in a “double-edged sword” kind of way. Thus, most players either love Alpha Mission or hate it. For the record, we love it. 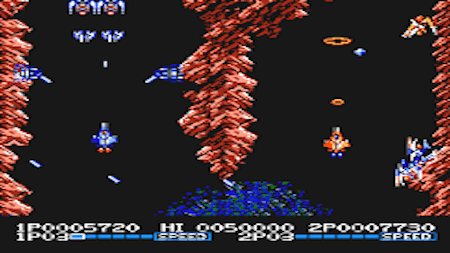 Life Force is an official spin-off of Gradius from Konami. It’s praised for its impressive graphics and widely regarded as one of the best 8-bit shooters there is. Plus, it’s an excellent 2-player co-op title.

As in Gradius, you can choose which ship features you want to upgrade. Collecting power-ups will change the upgrade category until you choose the upgrade you desire. These upgrades are essential for victory, but also easy to miss.

Unlike Gradius, there are both vertically-scrolling and horizontally-scrolling levels in Life Force. The game is slightly easier than Gradius—still quite a challenge—and lots of fun. 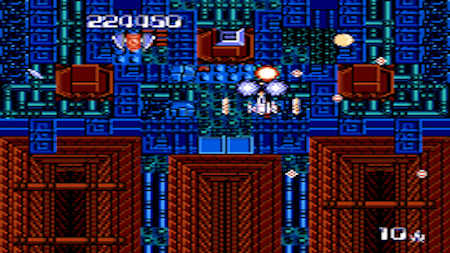 Zanac is more technologically advanced than it has any right to be. It’s like compile took an iconic 8 bit shooter, like Gradius, and added impressively perceptive AI. Specifically, this game changes in response to your actions.

See, many shooters spawn enemies and powerups in assigned places that never change. Thus, you can memorize this pattern and anticipate where the enemies will appear the next time you play.

But, in Zanac, every playthrough is different. Your actions influence how the game unfolds, especially the difficulty level. For example, the behavior, amount, and location of enemies will vary depending on how you play. 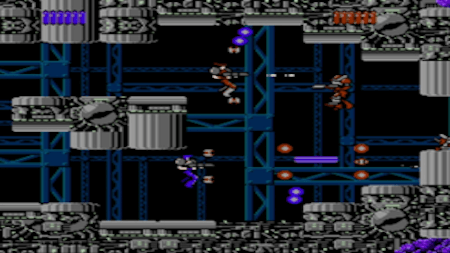 The first thing you notice about S.C.A.T. (Special Cybernetic Attack Team) is that it looks and sounds amazing for an NES game. It starts with an exciting, well-scored intro that really gets you in the mood to annihilate some evil alien invaders.

There’s even a real human voice that wishes you luck. No exaggeration: this is the clearest voice sample we’ve ever heard in an NES game. While that’s not so impressive by today’s standards, it makes this 8-bit adventure feel more real than most.

Besides the spectacular production value and theatricality, the game’s a lot of fun to play. Instead of a spaceship, you control a flying mech suit. In this respect, and most others, it’s extremely similar to Capcom’s earlier arcade hit, Forgotten Worlds.

All things considered, it’s a deceptively magnificent experience for a game that’s named after poop. Even better, there’s a 2-player co-op mode.

Get the Best NES Shmups Here

These are by far the best NES shmups for any retro gamer to try. At least, they’re our favorite NES shooters to play.  Honorable mentions include: Burai Fighter, Section Z, Dragon Spirit and Legendary Wings.

Now, try them out for yourself! Find these and other excellent NES titles in our online store. Read our other great articles about the Nintendo NES.

Wow, you left off the entire Gradius series and I don't know why 1942 (which is abysmal) is on here when 1943 is better.

0 Cancel Reply
Wow, you left off the entire Gradius series and I don't know why 1942 (which is abysmal) is on here when 1943 is better.
Cancel Update Comment

I see gradius is an honorable mention, 1943 is fine, but the cream of the crop has to be Gun Nac. It's such a fast pace shooter, that reminds me a lot of a turbografx 16 shump.

0 Cancel Reply
I see gradius is an honorable mention, 1943 is fine, but the cream of the crop has to be Gun Nac. It's such a fast pace shooter, that reminds me a lot of a turbografx 16 shump.
Cancel Update Comment

How do you manage to leave off objectively the best shooter on the NES, 1942?

0 Cancel Reply
How do you manage to leave off objectively the best shooter on the NES, 1942? -- Reply-- Honestly was never a big fan of 1942, Just thought there were better shumps....
Cancel Update Comment
1 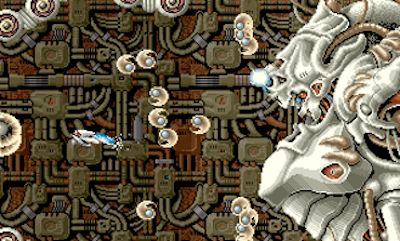 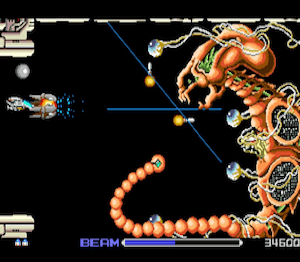