If you’ve never fantasized about slipping into a turtleneck, Archer-style, and infiltrating a base full of armed baddies on the down low, I don’t want to know you. If you do, however, find the aforementioned scenario enjoyable, you might want to check out CounterSpy.

Where a lot of stealth games struggle with pacing because it’s difficult to balance challenging stealth sections with periods of all-out action, CounterSpy delivers. Its combat is crisp, the controls are perfect, and the freedom that you, as the player are given when it comes to finishing any mission makes it a complete package. The AI is occasionally a little wonky, but it’s a minor annoyance when 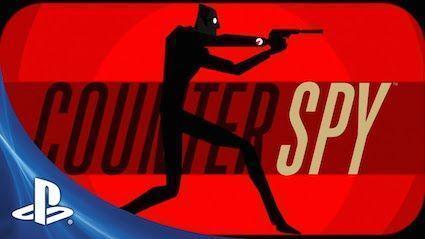 you consider the plus points of the game. CounterSpy has a ton of customization, stellar presentation and responsive gameplay. The only thing that holds it back is it doesn’t last too long.

If you’ve played stealth games before, you might go into this one expecting some staples of the genre – complicated controls, a ton of gadgets and inventory slots you need to balance and other mechanics you need to keep in mind. However, by putting the action largely in the 2D sphere, CounterSpy bypasses most of these problems. You have to do two basic things – jump and shoot. Once you reach the end of a level, you collect whatever intelligence or critical documents you came for, and then you move on.

The combat, at its core, is of the cover shooting kind. You’ll find plenty of objects in the environment you can hide behind as you pick off foes one by one, with none of them being any wiser to your whereabouts. You can hide in corridors and silently assassinate enemies when they turn the corner, or you can just pop a bullet in their heads and get it over with. Much like the Hitman series of games, you can go in guns blazing, but creeping around and silently stalking your prey is much more fun. When you aren’t peeking from behind cover, the action turns into the standard side-scrolling kind. One of the best parts about CounterSpy is that it is so easily accessible. Within a few minutes, you’ll know everything you need to about the controls and the mechanics of the game. Don’t mistake simplicity for a lack of depth though.

You gain new weapons as you go progress in the game, but your trusty silenced pistol will be your most valuable ally. The intelligence you collect at the end of each level unlocks a series of newer and stronger weapons such as a submachine gun and a shotgun, should you choose to take these into battle. You also get customization options for when you want that extra edge. Some of these options allow your character to have more hitpoints, while others are more subtle, such as giving you the ability to move silently by eliminating the sound that your feet make. You have to purchase these modifiers by spending in-game cash, and they only last for one level. So you’ll have to plan your budget carefully if you don’t want to be left in a particularly hairy situation with no cash modifiers to assist 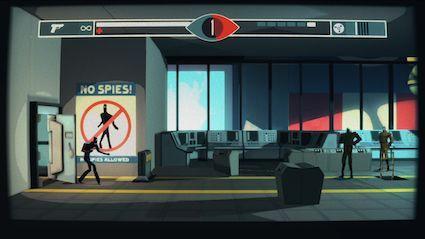 you. However, if you’re not completely terrible at playing the game and take a little time to explore the levels thoroughly, you should always have enough cash to buy modifiers.

There’s an interesting caveat to the Rambo, run-and-gun approach. The story of the game takes place in a fictional Cold War scenario, which means your actions as a spy aren’t completely without consequence. If you raise too much of a ruckus, you risk triggering nuclear war and sending the moon (because that’s the location under threat of attack) into oblivion. You have a doomsday clock you need to be aware of, and you can’t let either side get too antsy and push the button and unleash their nukes.

The graphics are cel shaded and they look striking on both the PS3/PS4 and the Vita. The storyline is similarly in tune with the time period, and the enemies and the locations represent the setting of the game perfectly. It’s also really funny in places, with a dry wit that will make you chuckle more than once.

CounterSpy is a fantastic journey, and it would’ve been great if it wasn’t so short. With a moderate level of experience, you should be done by it within three hours, even if you take your time and look around during the levels. Once you’re done, you can revisit the levels to collect newer weapon types, and there are online leaderboards that you can match your high scores up against. However, these aren’t really too big of an incentive to keep playing. However, the time that you do spend the game playing will be tremendously fun. CounterSpy has great graphics, smooth controls, fluid mechanics and for lovers of spies and spy games alike, it is a treat.