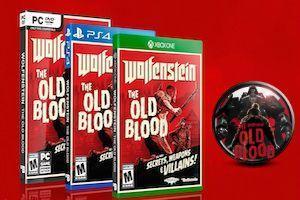 Wolfenstein, inarguably one of the most iconic FPS franchises, did something very interesting with its latest outing – it went meta. In essence, it acknowledged the amount of time since the last Wolfenstein had come out, and commented on the general evolution of the FPS game through its story. The protagonist B. J. Blackowicz was essentially a man out of time, a man from the old school trying to wrap his head around the technological doodads of the modern age. With Wolfenstein: The Old Blood, a follow-up to the fantastic The New Order, B. J. revisits this confusion, albeit a little more obviously.

In The Old Blood, there are several sequences where you are transported to Wolfenstein 3D (the game that started it all) as B. J. sleeps. In his dreams, you walk through the pixelated, sprite-filled halls of the DOS game, giving gamers everywhere a massive dose of the feels. These sections are representative of The Old Blood as a whole – it’s a throwback to the run-and-gun shooters of yore, even if it does stumble a tad in the narrative department.

The Old Blood takes him back to Castle Wolfenstein – the place where B. J. became a gaming legend. You start off the game by trying to sniff out the location of the Nazi HQ. Since this is a story set in the alternative World War II, B. J. is comfortable with the weapons and environment. The Nazis still have some advanced weaponry up their sleeve, but it’s consistent with the kind of things they were believed to be experimenting with during that time period. If you’ve played Wolfenstein 3D, be prepared for a nostalgia attack. You have the attack dogs, the giant robot, and the secret doors leading to areas you’re not supposed to be in.

Even though its setting is familiar, the execution is decidedly modern. The Old Blood does what all Wolfenstein games did so well – they make firing guns and killing things intuitive and lots of fun. Here too, each weapon in your arsenal has different firing modes, and they all look, sound and fire beautifully. You can also dual-wield certain weapons. The game mixes in all-out firefights with several sneaky sections where you have the option to bypass most of the violence. If you choose to, of course, you can still engage your inner Rambo in these situations. Be careful though, several levels will have you quickly outnumbered should you choose to stand and fight instead of run. The enemies AI is spectacular and will keep you on your toes. The bad guys will use creative flanks and approach tactics to surprise you. The Old Blood is decidedly a modern-day shooter, but it remembers what made old-school shooters so much fun.

Like The New Order, this game includes some commentary on where FPS games are headed. You still have the attack dogs you love (to hate), but now they move more realistically, wear body armor and snarl ferociously as they try to rip you from limb to limb. Remember the giant robot? Defeating him brings out a fresh wave of Nazi baddies. I guess gunshots are audible to other people in the area now. Who would’ve thought? Secret areas? Those aren’t opened up by conveniently placed wall buttons anymore. They’re just there, if you know where to find them.

Game developers have learned a lot about gaming (and about themselves) in the decades since 3D FPS games first came out. Kessler, who serves as B. J.’s informant, is a fierce idealist who has none of the gung-ho machoness of our here. He is an idealist, a writer, who wants to change Germany through the use of the pen. He’s against killing, B. J. is aiming for a body count record. Even the Nazi soldiers now have some depth, with some of them having flashes of families and loved ones. The primary villain, Helga Von Schabbs, isn’t a snarling maniac. Instead, she’s a seeker of adventure, even if she chooses to go about it in the most horrendous ways.

B. J., however, could care less about those things. See Nazi, kill Nazi. That’s his mantra. And that’s perfectly fine. The Old Blood is a spectacularly fun, violence-filled romp. But it seems to be confused about what it’s trying to say about violence in games. We’re given a brief moment of pause, but then B. J. just starts killing everything in sight again.

As you gleefully mow down wave after wave of Nazi monstrosities, you have to wonder whether the central point The Old Blood is trying to make is worth making at all. Have games really changed that much? Sure, we might want more intelligence and thematic depth in our games, but mostly, we just want to shoot things. And that isn’t a bad thing, but it’s a little disappointing considering the direction The New Order pointed us in.

Regardless, MachineGames has created a solid, fun shooter. They clearly understand the intricacies of the FPS genre enough to subvert certain genre tropes and stick to others. Ultimately, an FPS is meant to deliver an exciting shooting experience. And while change in games might be coming, there’s still a lot of glory to be found in the old school, as Wolfenstein: The Old Blood proves triumphantly.