I recently finished a play through of the amazing (if flawed) Grand Theft Auto V. It got me thinking about why my experience of it was so, so far away from my disappointment with Grand Theft Auto IV.

This post is about why, despite my desire to like it, Grand Theft Auto IV finally drove me away. A follow-up post will explain why Grand Theft Auto V won me over as an amazing, if still sometimes maddening game.

For Some Reason, I’ve never been a huge fan of Grand Theft Auto.

I remember watching someone playing one of the early top-down entries years and years ago and thinking it looked alright, but not particularly exciting. Then I remember watching my 14-year-old cousin playing Grand Theft Auto III at my grandma’s house over Christmas of 2001. Within three minutes of my watching, he was showing me that open world’s most infamous allowance - how you could sleep with a prostitute to gain health, then kill her to get your money back.

Grand Theft Auto IV - It Was Not Great, or Was It?

I played around with it for a bit and liked the open world structure, but found the world itself too juvenile to hold my interest. My 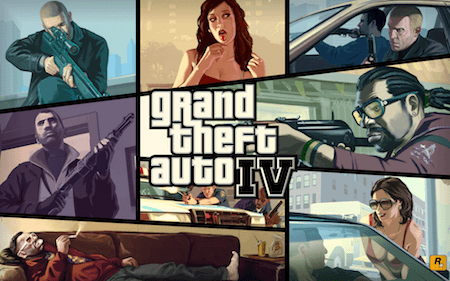 impression was of a game much more interested in what you can do than in what’s worth doing—or at least what I found fun or interesting (which is subjective, of course). Grand Theft Auto III felt like a proof-of-concept made by, well, a 14-year-old. There was a plot, but it was hardly the point – the dual points were the gameplay, which was of course groundbreaking, and the juvenile tone, which was of course not.

I started hearing much more interesting things about it. The game and its characters, seemed more obviously to “get” how screwed up its world was, and do the interesting things with this. Because of this, the story was actually interesting. The open world gameplay had simply gotten too amazing to pass up. So I gave Grand Theft Auto IV a serious shot. I played it for about 20 hours, getting a little less than halfway through the story missions, while doing a bunch of side stuff of course. But I had to admit to myself that I just wasn’t having that much fun.

The cars were kind of clunky, the cover and shooting mechanics were frustrating, and the story was okay but not really compelling. While playing it, I felt like I was holding my breath while wading through a sewer of crassness and misogyny that was constantly, inescapably in your face. Women are for sexual service. Guys on steroids have little penises. America has nice-looking women, but they all want something, what a hassle. Liberals are idiots and so are rednecks and so are women and so are the government and so are the middle-aged and corporations are all just greedy sneaky assholes, like everyone else. Okay, Grand Theft Auto IV, we get the joke.

No need to repeat it 10,000 times in slightly different ways

People are stupid, and women are barely people. It was like Rockstar had found the douchiest guy I went to high school with, magically extracted his essence, and drowned the 90% of the game content not focused on developing Niko’s story in it. He wasn’t funny in high school, and he and his 2000 NPC clones weren’t going to be funny for fifty hours in a game. And the Niko stuff that wasn’t in the same vein was just okay (and felt weirdly out of place surrounded by the sea of adolescent insecurity babble).

Oh, and the phone. I hated it when, on my way somewhere, I’d get a call on the phone from a character asking to hang out. I wanted to see where those side narratives would go with Michelle, or Roman, or Little Jacob, so I’d usually stop what I was doing…and then the ‘hang out’ would usually just involve bowling or darts, having to drive home drunk, and winding up way across the map from wherever I’d been without any sense that I’d actually learned anything interesting or opened up new options with the character I hung out with. It felt like a waste of time, and that was the problem with the whole game – almost anything I’d do, afterward I’d feel like it hadn’t really been worth the time I was investing.

The world was interesting

But I felt like I was spending way more time than necessary driving all the way across the map to get to mission markers, and with some missions, failing and retrying drove me nuts. I’d do fine for the first several minutes of a mission, then I’d lose track of where a target was going, or I’d wind up in a dead end (etc.), and the mission would fail. I’d then have to restart the mission, replay the several minutes I was already good at, and fail like thirty seconds further in, forcing yet another restart and several minutes of stuff I’ve already done.

At some point, I asked myself why I was still playing the game

Sadly, I didn’t really have an answer other than “Surely at some point I will start to like this game.” But trying to like it felt like work most of the time. And yet I felt like so, so many aspects of the game were almost really fun or almost really thought-provoking. As a technical achievement, I couldn’t help but respect Grand Theft Auto IV; I was just sad to find out that I still didn’t want to play it.

Niko’s “serious” story was so-so (hardly the “Oscar-caliber” experience described by IGN), the humor was still not funny, and while the gameplay had made another great leap forward in open-world achievement, when I was only interested in like a quarter of the stuff that I could do in that world, it got old sooner rather than later. The newly serious main story wasn’t doing it, the characters and side interactions weren’t doing it, the driving wasn’t doing it, and the random interesting parts were too few and far between.

Overall, the combination of elements

In Grand Theft Auto IV just didn’t work for me. I wanted to explore this meticulously constructed world, but very little of it was fun, and the serious stuff wasn’t that interesting either. Clearly, a great number of people disagree with me on this. Try as I might, though, I couldn’t get into Grand Theft Auto IV.

Happily, in the past few years, open-world gaming has taken that next step and gotten past many, many of the “almosts” that kept Grand Theft Auto IV from working for me.

Which parts of Grand Theft Auto IV gameplay did other people liked and didn’t like. Is the juvenile humor part of the appeal more often than not? Or are a lot of people willing to put up with it to get at the state-of-the-art open-world gameplay? Or is it hit-and-miss, with some jokes working and others falling flat? Did the driving and mission structures bore and frustrate you, or work for you?