It can happen to even the most scrupulous retro-game collector. You’ve got a pristine Super Nintendo displayed alongside other throwback consoles, and yet somehow it turns yellow over time.

You haven’t spilled anything on it, you haven’t touched it in years, and it’s even in its original packaging! While we’d like to say the reason is perfectly simple (cigarette or bong smoke wafting over it on a regular basis) or eyebrow- 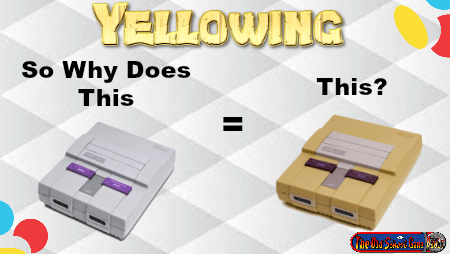 So here’s what you need to know about yellow game consoles—and how to prevent it from happening to you.

Hardly a great revelation to say that the main symptom of a yellowing video-game system is, in fact, a yellowing video-game system. However, look closer, and you’ll be able to definitively rule out nicotine stains. If smoke is the culprit, then the damage will be mostly superficial and can be cleaned up with a common cleanser; if not, then the problem is a chemical one. More on this below.

The operative word here is “oxidation.” You see it everywhere, from car exteriors to old tin cans to pipes in the home. It even affects living tissue and food. (That avocado turning brown a minute or two after you cut into it? Oxidation.) And it’s the same thing that’s causing your SNES system to go jaundice.

A little backstory: when Nintendo first began manufacturing their consoles in the ‘80s, they required materials that would be easy to mass-produce. For their plastic needs, they usually chose ABS (acrylonitrile butadiene styrene), and they did so for two reasons: its durability and its low cost. Unfortunately, that old adage of “you get what you pay for” applies here. Unlike other more expensive plastics, ABS is sensitive to UV light. Throw into the mix the number of flame-retardant chemicals, such as bromine, used to render the plastic incombustible, and you have the perfect recipe for oxidation.

If the yellowing has already occurred, then unfortunately the damage is done. Therefore, the best offense for a yellowing SNES is a good defense. Online tech aficionados recommend spraying non-yellow consoles with a UV-resistant coating. Unfortunately, this would likely involve disassembling the chassis and taping up sensitive ports and inputs. Another preventative method involves keeping the SNES away from as much natural and artificial light as possible, since those pesky UV rays are what cause the yellowing in the first place. Keeping the system in a cool place is another tip, as is keeping it sealed in a lead-lined bag. But since no one is handling radioactive components or sensitive microfilm, that last suggestion might just be overkill.

Ultimately, those who don’t want to junk their yellow machine can hit the workbench with a bit of light-grain sandpaper and get down to business. It’s worth mentioning, however, that this is an extreme solution, and delicacy is the name of the game—you certainly don’t want to remove one too many layers of that chassis plastic.

Do not sand your yellowed console, you will ruin the surface finish. Look into retro brighting it instead.

0 Cancel Reply
Do not sand your yellowed console, you will ruin the surface finish. Look into retro brighting it instead.
Cancel Update Comment
1