Are you wondering, what does “black label” mean in video games? You’re not alone.

It gets confusing when one game is released under so many different labels. You’ll often see Gamecube Player's Choice vs black label or PS2 black label vs red label, among other variations. What do these different release labels of video games mean for the cost and content of the game?

Technically, they don’t inherently mean anything. Or, rather, these relabeling campaigns mean something different for each console. Nor does each labeling campaign mean the same thing every time.

Yes, we understand that this answer does not even slightly clarify the issue. That’s why we’ve written you this comprehensive guide.

It compares the various labeling campaigns of several different consoles to give you a complete answer. Read on to learn all you need to know.

Avid gamers are well versed in these terms, as they represent an ongoing argument in the retro-game-collecting world. For those who aren’t aware, the black label refers to the black border printed on the original label.

The green label refers to the “Greatest Hits” release of a game, which features a green box with the words, “Greatest Hits.” This label 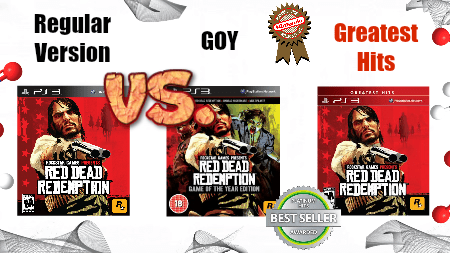 Besides the price and label design, the only difference is the instruction manual. Green-label games contain a black-and-white manual as opposed to the original, full-color manual.

There are no differences in the game content, except for a few green-label titles. These contain additional content, such as game demos, control improvements, and bug fixes. Usually, the updated versions are signified by the words, “Special Edition,” but not always.

What This Means to Collectors

In many ways, the original PlayStation “Greatest Hits” versions represent the pinnacle of an argument that extends to all other consoles. So, which version of a game is truly the one to own?

Many gamers are split evenly down the middle. Hardcore collectors often prefer the untarnished black case and colorful disc art of the original printing.

However, because of this, green-labeled PlayStation games are usually cheaper, even today. Thus, gamers who solely wish to play the game and not display it on their shelves are happy with the bargain prices of the Greatest Hits versions.

Having said that, rarity is a factor as well. Although, some of the Greatest Hits versions of PlayStation games (notably, Final Fantasy VII) actually have fewer printings than their original counterparts. Thus they’re technically rarer and they cost less money.

However, that particular version included updates that utilized the DualShock controller, which had just been released at the time. Conversely, the original version of the game isn’t compatible with DualShock.

Concerning Greatest Hits titles, the PS2 didn’t deviate too much from its predecessor. Except, instead of green labels to denote a new printing of a popular title, they switched over to red. It’s still eye-catching, but a lot more attractive than the jarring neon green of the PS1 labels.

Red-labeled PS2 games feature unaltered manuals and game content. The only differences are the outer packaging and the words “Greatest Hits” on the actual game disc.

What This Means to Collectors

In any case, many collectors double down on their rejection of Greatest Hits titles. They feel that the black packaging of the original PS2 releases looks sleeker than their red-labeled counterparts. Still, like their PS1 predecessors, PS2 Greatest Hits versions are cheaper to buy than original printings.

Dreamcast Original vs Sega All Stars

The Sega Dreamcast had its own Greatest Hits line known as Sega All Stars. This example often befuddles game collectors everywhere.

Namely, the Sega Dreamcast itself is now viewed as a hot item due to its relatively short lifespan. This tragic marketing failure was Sega’s last attempt at developing a game console.

Technically, therefore, all Dreamcast games can legitimately be considered collector's items. In total, there are only 17 Dreamcast titles that ever got the All Star label. Add to that the fact that both versions of games cost about the same.

So, then, why does it matter whether a Dreamcast game is a re-release (red label) or an original (white label)? Actually, there are some hot finds in the All Stars realm if one knows where to look.

For instance, the All Stars version of the first Marvel vs. Capcom was a limited printing, even more so than its original counterpart. Plus, many All Stars titles included bug fixes.

The Xbox released its “Greatest Hits” titles under the banner of “Platinum Hits.” And, as with the PlayStation re-releases, the argument over the worth of Platinum Hits titles is primarily aesthetic.

Many collectors simply don’t like the silver packaging. That said, there are some Platinum Hits games that come with bug fixes and other extras.

The Platinum Hits version of Mass Effect, for example, includes a second bonus disc filled with extra DVD features. Thus, it definitely pays to do your research before purchasing games made for the original Xbox.

Opponents of The Greatest Hits game versions can blame Nintendo for ushering in the trend. Beginning way back with the Super Nintendo, the company began re-releasing games once they sold a million copies or more.

They called these versions, “Player’s Choice,” and the name stuck until 2011. Then, they switched the name to “Nintendo Selects.”

The re-releases were identified by the Player’s Choice/Nintendo Selects logo in the corner of the game box. Besides this, there don’t seem to be any noticeable differences between the original and re-released versions of the games. Although, there may be minor bug fixes.

Game of the Year Editions

Games that are awarded “Best Game of the Year” by certain gaming publications are re-released under a “Game of the Year” label. These special editions are released on several consoles and are often known as GotY versions or “Ultimate” versions. To be clear, “Ultimate” is a great description since these releases are loaded with extra content.

In addition to the original game, they typically include most if not all of the DLC (downloadable content) ever made for the game. Alternatively, buying the original version and the DLC in separate installments is far more expensive.

Let's look at Star Wars Battlefront as an example here. At the time of its original release, the game looked great on all accounts.

But, after several installments of DLC added to the game’s depth, we all realized how shallow the original was. Now, by comparison, it seemed sparse, lacking in overall gameplay quality. So, those who bought the original felt compelled to buy individual DLC installments or the possibly cheaper “season pass.”

Alternatively, players who wait, say, 9 months to a year after the initial release could just buy the GotY version. That way, they get a better game at a way better price.

Keep This Guide to the Different Release Labels of Video Games

Ultimately, the different release labels of video games mean that gamers can enjoy popular titles, sometimes improved, at an affordable price. Should this fact automatically render them less worthy than an original printing? That’s up to you.  Likewise, we’ll buy any version of any game you want to sell. Go here for more details on how you can sell video games online to us.

In any case, you should be able to find any version of any game you’re looking for in our store. Just be sure to research the different versions of the title you’re interested in first.