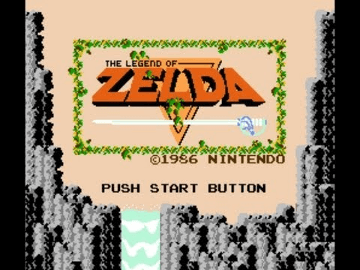 Zelda II: The Adventure of Link The Legend of Zelda games are seriously one of the best video series ever made. Still, the larger this series gets, the more questions it raises.

Are the Zelda games connected and if so, how? And why does Link always start the game empty-handed? Where are the items he won in the previous games?

Perhaps the most common question is, “What’s the correct order in which to play the Zelda games?” That’s easy: play them oldest to newest.

Honestly, we may never understand the overly complex in-game chronology. But we’ll gladly give you a guided tour through the History of the Zelda Games.

Besides, it’s more fun to see the series progress as you play through in the originally-intended order. Together, let’s explore how it all started with the first 2 classic games in the series.

1. The Legend of Zelda - Nintendo NES

The Legend of Zelda original game release was on the Nintendo NES in 1986, is the game that started it all. And the legend behind this Legend began at the childhood home of Shigeru Miyamoto, the

The story goes that young Shigeru loved exploring the vast wilderness of Sonobe, Japan. He’d blaze trails, descend into caves, and discover secret paths to hidden villages. For the first Legend of Zelda, Shigeru successfully created a game that could provide this same type of experience.

The fairy tale elements were inspired by medieval folklore and fantasy novels like The Lord of the Rings. And the name Zelda was chosen in reference to the famous artist/novelist Zelda Fitzgerald. They just liked the sound of it.

Despite being the oldest, The Legend of Zelda is as much fun to play now as when it was new. In fact, it’s still one of the best video games in the series.

At the start of the game, players are given a sword, a shield, and nothing to do except go outside. From there, explore.

You’re given almost no instructions the entire game. And that’s the beauty of it: sweet, sweet freedom. You go where you want, do what you can, try to survive, and, sometimes, find hidden areas.

Your character, Link, travels across the land, one screen at a time. Each screen allows you to go up, down, left, and/or right.

The layout is like a maze with dead-ends and interconnected areas. Some areas are only unlocked by solving puzzles or obtaining special items.

How Long Is It?

Most notably, the game is truly enormous. The over world includes a total of 128 screens. Additionally, there are underground labyrinths with several rooms, hidden treasures, and boss battles.

While professional speed runners could beat the game in half an hour, it takes first-timers 8-10 hours at least. Hundred-percenters and side quest enthusiasts will spend many more hours on the game. Considering that most games of this era are 2-hour-long sidescrollers, that’s pretty impressive.

And did we mention that the cartridge version includes a bonus game or second quest after you beat the first? It has new maps, new enemies, new puzzles, and different hiding places for all items and levels.

In the Legend of Zelda series, subsequent games don’t always continue directly after the previous game. Zelda II The adventure of link, however, does.

This time, Princess Zelda is under a Sleeping Beauty-type enchantment. Strangely, she’s not princess zelda from the first game, though she is one of her ancestors.

Link (from the Legend of Zelda) is tasked to find the Triforce of Courage, which can revive her. More importantly, though, if someone else finds the Triforce before him, they will plunge Hyrule into darkness and chaos. You can read the whole story in the instruction manual.

What Is This Game?

Zelda II The adventure of link is, hands-down, the weirdest of the Legend of Zelda games. The gameplay is completely different from the first game. And it’s nothing like the other sequels, either—or any game, for that matter.

Specifically, it’s the only game in the series that includes:

And it’s the only game that doesn’t include “Legend” in the title. Also, unusual: the graphics are kinda ugly to look at. That said, Zelda II can be quite fun.

While all other Legend of Zelda titles are action-adventure games, this one is technically a role-playing game. You defeat enemies to gain experience points. When you obtain enough points, you can choose which start to level up: Life (Defense), Magic, or Attack.

While traversing the over world, monster-shaped shadows appear sporadically and try to grab Link. If they touch him, it takes the player to a side scrolling battle screen.

To return to the over world, exit the screen to the right or left. If you defeat all enemies before exiting the battle, it takes longer for the shadows to reappear. Towns, dungeons, and other areas are side scrolling as well.

You should also know that Zelda II The adventure of link can be very challenging. Namely, dungeons are extremely tough until you spend a lot of time leveling.

And some puzzles/mazes are unreasonably difficult to solve. Usually, this is due to similar-looking screens, counter-intuitive solutions, and a lack of clues (intelligible ones, at least). 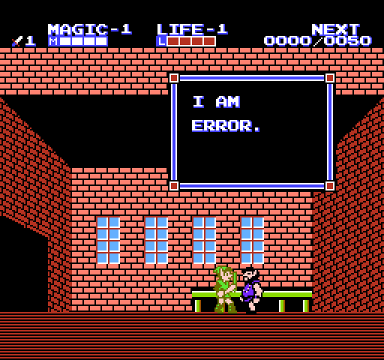 Overall verdict: Zelda II is uniquely fun, but also frustrating—an acquired taste, for sure. Still, it’s one that’s definitely worth experiencing, if only to see the origin of many Legend of Zelda series staples. Metered magic, NPC towns, the Triforce of Courage, and Dark Link all make their first appearance in Zelda II The adventure of link.

Experience The History of The Zelda Games Firsthand

As fun as it is to read about these nes zelda games (apparently), it’s a lot more fun to play them. Get your hands on these games and experience the gameplay of the Legend of Zelda Games firsthand.

Specifically, shop for these two classic games and other original Nintendo NES Games for Sale.  Our vintage video game store includes many modern games and a bunch of other console video games. 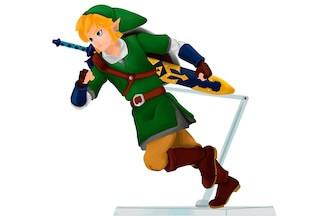