I’m not the kind of player who longs for “the good old days” when games seemed to hate you and want you to die. My attempt to replay Paperboy and recapture the glory of my NES days was short-lived as I realized how needlessly, unrewarding cruel that game is—I just didn’t know any better as a kid.

But I’m also not the kind of player who wants games to be easy. My first walkthroughs are more often set to Hard than to Normal. My biggest disappointment about the death of my first PS3 Console was that I lost the save data for my finished Hard play through of The Last of Us and so wouldn’t be able to play Survivor mode next.

The difference is in what makes the game difficult

Difficulty, like everything else in a game, can be designed well or poorly. To see what good difficulty plays like, we need look no further than the PS4 exclusive Bloodborne, the latest offering from the sadistic team that brought us the Dark Souls games and, before that, the King’s Field games.

When I scream obscenities at the TV while playing Bloodborne—which is often enough that my cat just kind of steers clear of the room now while the game is on—I’m enjoying myself. At the same time, I’ve realized that Bloodborne isn’t a game I can play while tired. I need to be alert and at my best to have any chance of survival. But even though I wouldn’t consider myself a brilliant action-RPG reflex-happy gamer, I can succeed at Bloodborne when I pay attention and learn from my mistakes.

One thing Bloodborne does so well

Is the game ensures that those mistakes are my fault—the game has a clear (electronic) manual and a decent system of unobtrusive in-game tutorial notes you can read if you choose, so when I fight poorly, it’s because I still haven’t learned the timing of my various 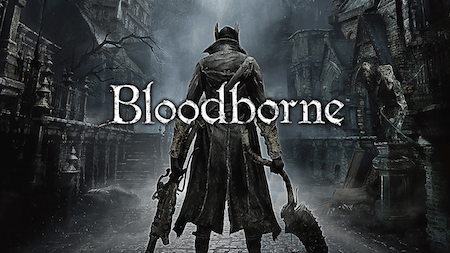 attacks and dodges and how to deal with being staggered when an enemy’s blow hits. I was shocked when I first played at how quickly a battle can go from being under control to being over because I have been brutally killed.

If an enemy lands a strong blow, and you don’t evade at the right time while staggered, they’ll just go to town on you until you’re dead…much like you do to them when you catch them unawares or stagger them. I really like this parity. Sometimes it’s fun to be overpowered compared to your enemies in a game, but sometimes it’s fun to feel like you’ve earned every kill because things could have gone the other way exactly as quickly and easily.

Getting to my first lamp (respawn point) only required me to beat a few enemies—but my next one took me like 3 hours because I was playing tired and sloppily. When I replayed that section the next day with more energy, I made it to checkpoint two in about an hour because I played more carefully and with more respect for every enemy—even the ones I’d killed 30 times by that point.

I’m the type of gamer who occasionally falls prey to the temptation to save constantly to avoid having to replay much. Bloodborne, but taking that option away, has forcefully reminded me of the joys of earning a victory by doing everything right at the same time, not reloading until I get one thing right, then saving, then reloading until I get the next thing right. I feel like a better gamer playing Bloodborne.

To give another example, there’s no pause feature. None at all. You cannot pause Bloodborne. If your controller runs out of batteries, you will watch as your character dies a mercifully quick if brutal death. If you need to get into your Inventory, you’d better find someplace to be alone. So you’d better have all the items and weapons you expect to need in your handful of quick select slots. The utter lack of pause is surprisingly fun.

It refuses to let you pause and take in a situation tactically at your leisure, so you either have to scope out the battlefield before entering the fray or learn to be aware of your surroundings on the fly while fighting—or, really, both. It’s always both in Bloodborne. Unless you’re a way more skillful player than me, both advance planning and improved situational awareness mid-fight are necessary to survive.

The game does a good job training you in these skills

Starting with easier enemies and working it’s way up—once you find the right path. You also come across tough enemies early that quickly inform you that you are not ready for them by dispatching you with ease. So Bloodborne is also a game where I know the level layouts particularly well. I know where I can go and do alright, where the new tough fights are, and where I need to stay away until I’m stronger and/or more skilled.

All this is true without the game giving me a map feature or a ‘your goal’ feature to lead me to the next boss or treasure. Like the lack of pausing, the lack of a map forces me to be better on my own—to learn how places are connected as the character would, from being there rather than seeing a bird’s eye view or knowing where an enemy I’ve never met is lurking. It’s fun and immersive.

I don’t want every game to be Bloodborne

I’m not that much of a masochist. But with a truly well-made game, difficulty can be gloriously satisfying. It’s refreshing to have to learn how to overcome fair (as opposed to cheap) challenges. To have to peek around corners rather than just barging in confident that I can defeat whatever’s coming without strategizing. Bloodborne is a game that respects your intelligence and forces you to use it to learn to survive. And it turns out that’s a fun lesson to learn from a good—if unforgiving—teacher.

Bloodborne, like the Souls games before it, is a love-it-or-hate-it prospect for most. Which camp are you in? What are the most satisfyingly difficult games you’ve ever played? What games are difficult but infuriatingly cheap about it? What makes the difference for you?