First-person shooters, platformers, side-scrollers, shoot-em-ups—these are just a few of the many video game genres out there. Add all those sub-genres into the mix and you have near limitless options for gaming.

Still, there are some genres that have risen above the rest, having long endured and captured the imaginations of casual fans and hardcore gamers alike. Survival horror games is one such genre.

Survival horror can be measured in two parts: before “Resident Evil” and after “Resident Evil.” Many game historians even go so far as to say it created the genre as we know it today. While the design of Capcom’s “Resident Evil” took some cues from the 1992 computer game “Alone in the Dark,” the finished product was something else entirely. It combined action 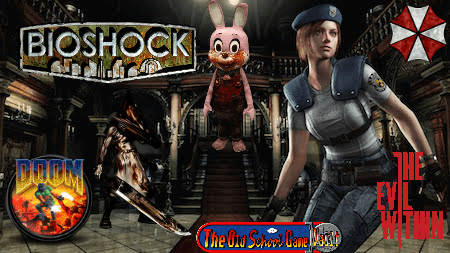 and puzzles with zombies and nail-biting suspense. The first in the series set the tone for the countless sequels on various platforms over the years, all featuring such “RE” mainstays as typewriter-based save files and a complex inventory system. To put a finer point on just how just how culturally relevant these titles are, “Resident Evil has spawned a series of movies, comic books, novels and toys.

The inclusion of “BioShock” in a list of survival horror games is sure to elicit some strong opinions. While it’s true that most regard this 2K title as a typical first-person shooter, it is anything but average. With its premise that sees a castaway protagonist exploring an underwater utopia-turned-dystopia, it combines elements of role-playing and, yes, survival horror. If this were merely a list of the best survival horror games of all time, it probably wouldn’t make the cut. But since this list is focusing on the most iconic titles out there, “BioShock” definitely deserves a spot on our list.

Another game classified as a straight FPS by many gamers, it nonetheless features the two elements necessary to qualify as survival horror—namely lots of survival and lost of horror. What it lacked in complex plot (you play as an unnamed space marine shooting up demons on one of Mars’ moons), it more than made up for in gore and raw, unadulterated firepower. “Doom” was such a violent cultural touchstone, in fact, that it was blamed for everything from school shootings to the decline of western civilization.

Mood was a critical element in past survival horror titles, but few realized just how much focusing on atmosphere could enhance gameplay. Konami’s “Silent Hill” took the focus away from combat and placed its everyman protagonist (looking for his lost daughter) in fog-shrouded 3D environments and the darkened rooms of creepy houses. The result was a success that added a psychological thriller element to the survival horror genre. Like “Resident Evil” before it, “Silent Hill” spawned its fair share of sequels, movies and merch.

On its face, “F.E.A.R.”, with its premise regarding a special-forces team called in to investigate paranormal phenomena, doesn’t seem very unique. But the game’s Japanese horror-inspired tone and focus on the anticipation of the encounter has elevated it to classic status. (It doesn’t hurt that a creepy little girl is the antagonist of the story.) It even spawned a Dark Horse comic book.

“Resident Evil” had the zombie/mutant genre cornered for so long that it seemed unlikely anyone else would add anything substantive to the conversation. But in 2008 “Left 4 Dead” came along. The genius of this game wasn’t that it tried to reinvent the wheel; it merely amped-up the gameplay by making subtle changes. What little story there was centered on a group of stranded survivors in the immediate aftermath of a zombie apocalypse. Stock up on weapons and ammo, get from safe house to safe house, and don’t get dead—that was the goal. And by upping the zombies’ RPMs, the game ratcheted up the tension and created a white-knuckle experience for the ages. On that note, “Left 4 Dead” makes a solid argument that fast-moving, high-octane zombies belong on the console instead of in the cinemas.

In recent times there seems to be an abundance of games that are high on shock value while offering little substance. (“Hatred” comes immediately to mind.) But no matter what anyone says, there is an art to gaming violence, even more so when you want to immerse players in a compelling world. To this end, “Manhunt” did everything right. Its premise was as creative as its gratuity was unapologetic. In the game you play as a death row convict abducted and forced to murder for the enjoyment of the TV masses. It was “Running Man” meets Wes Craven’s “Shocker,” and by focusing on stealth, the game rose above typical gore-fest. In the hands of a less devious publisher, “Manhunt” might have been found wanting. But with Rock Star at the helm, the end result was sublime.

Where “Manhunt” focused on stealth, “Condemned” opted for melee. It also put a premium on the aforementioned mood and unsettling atmosphere. The premise of an FBI agent trying to escape a city filled to the brim with serial killers was a good one, and it ensured a high body count. While some gamers might scoff at the lack of projectile weapons, there’s something to be said for the bone-crunching pleasure that comes with bludgeoning someone with a pipe.

What do you think? Did we leave any survival horror classics off this list? Are there any that simply can’t be overlooked?

Retro Review Showdown, Which Mario Kart Game Is the Best?

Mario Kart: Is it Still Fresh After All These Years?