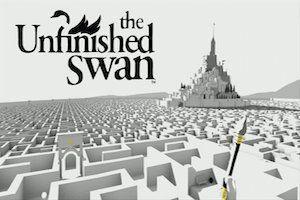 “The Unfinished Swan is a game about exploring the unknown.

The player is a young boy (Monroe) chasing after a swan who has wandered off into a surreal, unfinished kingdom. The game begins in a completely white space where players can throw paint to splatter their surroundings and reveal the world around them.”

The game was released on October 23, 2012, and is available exclusively for the PlayStation 3, PlayStation 4, and the PlayStation Vita. It's a downloadable game so to buy it you'll need to visit Sony's online store.” ---- http://www.giantsparrow.com/games/swan/

The Unfinished Swan is a PlayStation exclusive release currently available for $14.99 on digital PSN. If you were like me, you may have downloaded this title for free as a PSN+ member back in May. If you are like me then you also a familiar with the term ‘back-log’. So…like many others, I downloaded The Unfinished Swan and promptly forgot about it. It wasn’t until last week that I decided to take some time to play some of the free games I have accumulated as a re-occurring PSN+ member and decided I would try this unique bedtime story of a game. For the most part, I am glad that I gave it a chance and doubly-glad I didn’t have to really pay for the game, directly at least.

Players will find inside this digital game a unique, first-person title in which you control the young boy Monroe, traversing a kingdom in which its arrogant king has turned his city into an empty shell, void of color, life, and people. It’s up to you and your arsenal of small paintballs and water balls to solve the puzzle of each world that you enter. Start the game in a completely white screen. Sounds boring, huh? Well, to be honest…it was. That is until you lob a few of your black paintballs into the air and find that they actually make contact with a hidden, colorless world; thus learning the need to think as you explore.

A+ for Artistic Vision

The Unfinished Swan is a testament to the artistic side of gaming that is missed in a lot of popular games today. Beyond the first world and chapter, each world is a unique event and puzzle that requires ‘fleshing’ out of sorts whether its black paintballs in some stages or water balls in others. Uncover clues and learn more of the bedside story by discovering hidden paintings along walls. I enjoyed the story probably the most and I think the developers, Giant Sparrow & Santa Monica Studios aimed just for that.

The whole game is built around a boy following a swan into a magical world in need of help. I could almost call the game’s graphics basic by modern standards but looks can be deceiving. Whereas some worlds appear basic and simple, lob a few paintball around and discover that you are in standing in a beautiful ballroom simply hidden behind its lack of color. In other areas of the story, where the world does have some shape or form, each level contains a unique (sometimes plainly simple) puzzle that needs to be discovered to learning more of the story, progressing further into each following, world. No matter what though, there is not a whole lot of use of color. And yet, that is part of its charm. There may not be much color the color it does use is sure to be indicative of something important to the game needing to be discovered somehow.

A Good Story is Told, A Great Story is Experienced

As I mentioned earlier, the developers are banking on players falling in love with the whimsical, bedtime story. And I did. There are so many other games that a great story is lost but not with The Unfinished Swan. The story is central to level & character development. From the time you follow a mysterious painted swan, your mother painted shortly before she passed away, to a magical kingdom’s story slowly told through its visual wall murals; players will feel the tug for the next part of the story to experience. Even more, kudos here, take it!

Too Bad the Swan Wasn’t Finished

After playing through The Unfinished Swan, there are a few issues that I found beginning with the sounds. As with its intentional lack of use for color, Giant Sparrow & Santa Monica Studios also left out 95% of the music. It’s a HUGE shame as I feel a great soundtrack would’ve enhanced my dreamy state of mind while playing the bedtime story. Instead, there is some music during important junctions of the game or when the cut-scenes unfold but there is just so much dead-space in between that I actually thought they really did forget music much of the time, but it never did. Just silence in between…

Of course, there had to be the annoying game mechanic that requires some absurdly, idiotic puzzle to be solved. Case in point here is with a couple of levels requiring you to lob your water balls into a dried up plant bed, grow vines up the walls of the castle. Pulling teeth would be more enjoyable and fun. I actually love to garden in my spare time. The tedium of the job at hand was horrible, time-consuming and so childishly simple. Climbing pipes aren’t exactly a piece of cake either but kept to a minimum.

Thanks for the Fun, Until the Next Chapter is Told

Overall, players who enjoy a good artistic game or puzzle will have a great time with The Unfinished Swan. The replay value is moderate. The only side objective is finding balloons which I missed a couple so I’m not sure what the reward would have been but I could always go back and find out if I wanted. As a premium-freemium, I am glad I finally took the time to play. Others who have it should give it a try. For the current price of $14.99, this game becomes great for puzzlers; not so great for action-loving gamers. I recommend a buy all the same. This is a unique game that may need to experience and enjoy for themselves even if this is not your usual game.

I have a self proclaimed doctorate in free-thinking. I refuse to self marginalize myself into a specialist. But, that being said, my truth is encompassed by a passion to explore the complexities of being human and our desire for adventure through the Liberal Arts, philosophy, folklore, mythology, psychology, sociology, videogames, and our co-dependencies within the vast Matrix of technology we continually create, renew, refine, discard, and observe ourselves within.