I never owned an Xbox system until I bought a 360. I was almost exactly ten years late to the Halo party when I fired up a hand-me-down copy of Halo 2 that fall. Halo 2 was showing its age by that point, of course, but it still made an impression in a couple of ways.

First, it was clear that this was a shooter with an unusually elaborate universe and backstory. Second, I was surprised by the large investment seemingly required to get much out of that story.

As I continued on to Halo 3,

Halo 4, and then (backtracking). I was struck at each point by How difficult and nearly irrelevant it was to figure out what was going on.

Should Halo Expanded it's giant Universe going forward? Or Not?

I played most of these campaigns local co-op Is Local Multiplayer on Its Way Out—or Its Way Up? (on Legendary) and we’d joke about what we’d missed when narrative info was transmitted by voice-overs in the midst of heavy firefights, since the takeaway was always “Go here, blow up this and kill everyone you see,” or occasionally “Go here, defend this by killing everyone you see.”

There was a vast narrative happening, but I was only getting the barest outlines of it from playing the games themselves. I’d lose track of what was happening during the firefights and catch back up (mostly) during the cutscenes, which often remained confusing, however, in terms of how events fit together, motivations, and logistics.

To be clear, the Halo approach to game design isn’t bad

(Obviously.) Rather, it’s unique, except with Halo: Spartan. What other series combines such a vast and intricate narrative with near narrative incoherence during the actual game experience? Despite the fact that the campaign experiences didn’t make me care much about the story (or what parts of it I could piece together), I kept playing because the gameplay is fun.

It’s really well-designed, for single- and (local and online) multiplayer. But for those players who do want to dig into the universe, there’s a near bottomless well of backstory and transmedia works to turn to, from the (non-canon) Cortana Letters that preceded the release of Halo: CE and the ARG i love bees used as viral advertising in the run-up to Halo 2 to the many adaptations and spin-offs in the form of novels, comic books, films and TV series, including the distinctly non-canonical third-party web series Red vs. Blue and the sanctioned, Spielberg-produced Halo TV show to premiere in 2015. In this way, Halo caters to both the casual shooter fan and the sci-fi enthusiast who wants a universe that rewards exploration.

Halo accomplishes this by cutting out the middle piece

This is largely due to Mass Effect’s alternation between third-person-shooter combat sequences (which, like in Halo, don’t particularly advance the story) and RPG sequences where you interact with NPCs, make decisions, gear up, etc. These RPG sequences, along with cutscenes, present a more coherent story than the Halo games.

I play both series because I get something enjoyable out of each. Halo’s story may slip from my mind almost as soon as I finish a campaign (like the convoluted plot details of most Final Fantasy games, oddly), but the game is fun and I occasionally enjoy diving down the rabbit hold of the expanded universe by browsing the Halo Wikia and other Halo websites and transmedia properties like i love bees and RvB.

But having recently completed Halo 4, I’m interested to see where 343 Industries takes Master Chief and Cortana’s story because in that game, for the first time, I saw a 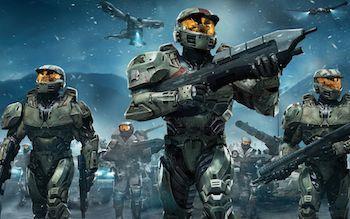 personal (as opposed to pan-galactic) story being developed relatively competently. The threat to the Master Chief-Cortana relationship posed by AI rampancy allowed them to develop the characters in a way the Bungie trilogy never did (as does the reintroduction of Dr. Halsey), and I think it’s a smart direction for the series to take.

Having established itself as a series welcoming to casual FPS gamers, the introduction of a coherent story into the cutscenes isn’t going to drive people away at this point. In fact, it probably never would have, but I think Bungie just didn’t have the resources to make the gameplay, the local stories, and the expanded universe all equally compelling at the same time, which is understandable.

But with the expanded universe and the gameplay well established, 343 can now turn its attention to shoring up the weakest area of the series, the game narratives. It’s possible that they’ll mess this up and the personal narrative arcs will make the games worse, and certainly, the Forerunner plot of Halo 4 wasn’t notably more coherent than the Covenant/Forerunner plots of the previous entries. Based on Halo 4, though, I think the addition of a more personal plotline will probably be a modest positive, as it made the cutscenes feel more worth my time than in the previous games.

And its fan service to the devotees of the expanded universe. Strengthening the game narratives may help the 343 Industries titles pull some Mass Effect and Half-Life crowd who want to combine exciting gameplay with stronger narratives in-game (and in a series that offers co-op play). What do you think about the Halo narratives? Am I off base in characterizing most of them as incoherent and uninteresting in terms of personal storylines? Is the turn toward the personal in Halo 4 a misstep for the series? Am I wrong in thinking that narrative is even worth paying attention to in these games?