Shining Force: Resurrection of the Dark Dragon has had a fantastic shelf life. The 2004 Game Boy Advance strategy RPG is, in fact, itself a remake of a 1992 Sega Genesis game.  That adds new characters, battles, plot, and gameplay revisions, and since 2004, the original has been re-released as part of Sonic’s Ultimate Genesis Collection for the 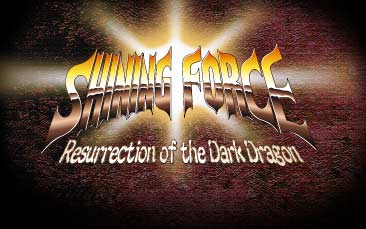 PS3 and 360 and as a downloadable title on the Switch, Steam, and iOS. So the game has fans.

Getting Lost all over Again, with Shining Force

Shining Force was one of the first turn-based tactical RPGs, following the original Fire Emblem (never released outside Japan) by two years, though its developers deny being influenced by Fire Emblem. I came to Shining Force looking for a game similar to the GBA Fire Emblem titles, and though I like the Fire Emblem games a bit more, I didn’t walk away from my first Shining Force play through disappointed.

Shining Force for GBA is a solid tactical RPG with a fun fantasy/steampunk story and a respectable degree of replayability. It’s likely to please a fan of Fire Emblem, Final Fantasy Tactics Advance, and turn-based strategy more generally, and while it won’t be a revelation to fans of the genre, it offers enough original gameplay mechanics and style that it feels like its own experience rather than a copycat or substitute.

It centers around about 30 standard turn-based strategy battles, where you control a party of up to twelve fighters (you start with fewer). The selection of characters offers enjoyable diversity, with flying warrior birds, a kooky inventor/aviator, 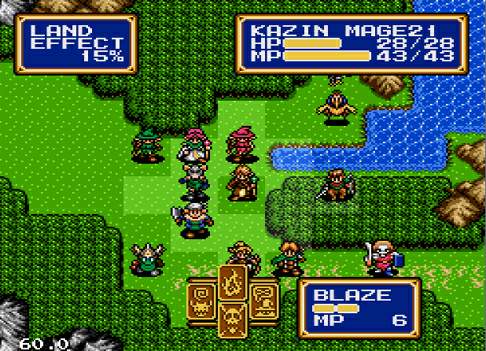 a steampunk-ish mech fighter, a floating jellyfish-type creature you can unlock by hatching him from an egg, a buglike assassin, and a baby dragon, among others, alongside more standard mages, archers, centaurs (cavalry), and warriors. Between battles, you can wander towns talking to NPCs, stocking up on items and equipment, and explore a basic world map for hidden characters. Some battles scenarios are typical while others are quite inventive, such as an army of evil puppets inside a circus tent or a bottleneck on a mountaintop bridge defended by a devastating laser cannon.

Strategic character development in Shining Force could be considered a weakness or strength. Some characters start out weak but level up robustly; others start strong but fall behind over time, and some start and end weak (especially Jogurt. Never use Jogurt). You will quickly have more characters than party slots, and once a character falls behind, it’s a hassle to catch them back up within one play through, so unless you’re consulting an online FAQ or in for multiple walkthroughs, there’s a fair amount of guesswork to the party development in a first play.

On the other hand, the first play through isn’t terribly hard

(unlike New Game Plus, I hear), so party selection mistakes aren’t fatal. Also, you can pay to resurrect fallen characters after a battle, so it’s not madness to take a weak character into battle to get them a couple levels’ worth of experience even though they’ll probably get slaughtered before the battle’s end (though this can affect the card-collection mechanic). And the variety of characters and the intricacy of figuring out how they develop over time and how different party configurations work in different battles adds a lot of replayability for players into those aspects of strategy, especially in the harder New Game Plus.

Shining Force’s plot is entertaining, with a bit of depth under a generous helping of light fantasy fluff. The protagonist Max is a warrior with amnesia caught up in a resistance struggle against a nation suddenly seeking world domination to secure a mysterious dark power. Shining Force features a layer of ancient steampunk-ish tech under the fantasy setting that links 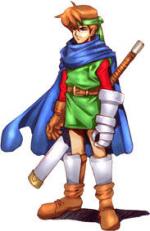 to a plot reveal that isn’t half bad (but that was apparently missing from the original 1992 English translation!).

One cool element to Shining Force’s storytelling is the ability to delve into individual characters’ backstories between battles by talking to them at the party HQ. You can follow up with characters that interest you and ignore those that don’t, though once a character’s been KOed in battle, you won’t get any more installments of backstory from them (and other factors play into when characters will or won’t open up to Max).

These conversations are also linked

The card-collecting mechanic added for the GBA version, which supports a new character who fights using cards to channel the powers of other characters. Talking to characters in Shining Force is one of the most frequent sources of new cards, so pursuing story can help you strategically, and seeking cards leads to exploration of the characters’ stories.

However, it seemed to me that the card mechanic (and character) weren’t all that helpful in a first play through, so this may be more interesting to people intending a New Game Plus as opposed to a single run through the game (and the fact that a single KO can prevent you from getting a character’s card and backstory adds frustration or challenge to this system, depending on how you look at it).

In my play through

I found it helpful in the second half of the game to abandon most of my first party of characters in favor of more powerful characters who joined later. I then built my party around a handful of seemingly overpowered tanks and damage-dealers, supplemented with characters seemingly significantly weaker in almost every way.

This dynamic seemed unbalanced, and I would have preferred all characters to have some strengths and some weaknesses, to six good fighters and six mediocre ones. I think this is at least partly an imbalance in the game, though it may also be partly my not managing the character development system perfectly.

Overall, I really enjoyed Shining Force – the story hit a few nice notes and the gameplay was fun enough that when I reached the end, I wasn’t sick of the battle system and would have happily kept playing a longer campaign. The game has really aged well, the core mechanics are still fun, so if you’re a fan of turn-based strategy, Shining Force: Resurrection of the Dark Dragon for Game Boy Advance is worth a look. And since this GBA game is only one in a large series of Shining games across a number of genres and platforms, if you like this one, there’s a lot more where it came from!